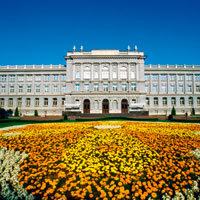 Zagreb, the capital of the Republic of Croatia, is one of the oldest European cities, with its history running back to the 11th century, and is yet one of Europe’s youngest metropolises. It is the administrative, economic, diplomatic and cultural capital of the country, with a population of almost one million. This “city of a million hearts” as locals call it, has always been attracting visitors’ attention. Lately, this interest has been growing faster than ever before, due to Croatia’s soon accession to the European Union. In addition, its central European location makes it easily accessible from all parts of Europe.

Zagreb is also the city of science and culture. Many excellent scientists and artists, who have enriched Croatian and world heritage, work here. The city has approximately fifty museums and galleries, as well as private art collections and about twenty theatres and musical venues.

From spring to autumn many events and exhibitions take place outdoors. They are a real treat for the visitors and they largely contribute to Zagreb’s special atmosphere. The most important cultural attractions and hotels, many of which are members of international hotel chains, are conveniently located in the heart of the city, all within 15 minutes walking distance.

Zagreb is renowned for its Gothic churches, Baroque palaces, Art Deco buildings, beautiful city parks, but is also famous for the fascinating atmosphere in the historic Upper Town and the numerous downtown outdoor cafes where the true pulse of the city becomes captivating. Other attractions include one of Europe’s most lively outdoor markets, Dolac, with its cheerful red parasols – it is here that the scents and the colourful diversity of fresh picked fruits, vegetables, meat and dairy products make you remember those almost-forgotten and cherished tastes of your childhood.

Although a Central European city in geography, culture and baroque architecture, in many ways, Zagreb has a Mediterranean way of life. Its numerous downtown open air cafés give Zagreb the appearance of the biggest European café. Thanks to its many influences, the city has a special charm which offers visitors that unique hospitable feel generated by its proverbial and open-hearted inhabitants.

To be in the city centre and enjoy nature and greenery at the same time – this is all possible in Zagreb. Whichever way you go, Zagreb delights with its beautiful parks as the city boasts a long park tradition, and a particularly valuable natural heritage.

Zagreb and its surroundings, with its exceptionally preserved nature, lure numerous visitors to explore the mysteries of the region: the castles, romantic legends, vineyards, spas, local gastronomic delicacies and traditionally hospitable hosts. Zagreb has a thousand faces and each one is professional yet relaxed, modern, with a dash of a thousand years of longevity, cultural and economic, urban and adventurous… in short, Zagreb is the city that simply has to be discovered and rediscovered over and over again.

The city houses a rich variety of venues for both small meetings and big congresses, and offers numerous exciting possibilities for setting up a memorable incentive or a fascinating event. High class congress hotels, halls in the very historical core of the city, numerous museums and galleries in addition to top quality PCOs and DMCs will make your congress an event talked about long after. Zagreb is a city where a captivating city atmosphere and making business make a perfect match.