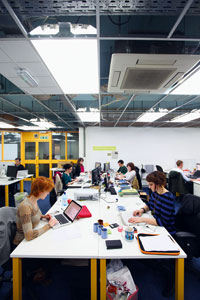 Yammer, the San Francisco-based social enterprise software company, opened its European office in London’s Tech City in early 2011. In itself, that doesn’t sound like a huge event except that Yammer, one of the fastest growing new-economy companies of all time, came to London pretty much by default. It almost had no other choice.

In a remarkably short time Tech City, as it has come to be called, has become a magnet for a new wave of internet-based start-ups and for the overseas offices of US ones such as four year-old Yammer. All highly ambitious, they are clustering in Hoxton in the ancient borough of Hackney in such numbers that Tech City’s promoters have rather cheekily dubbed it London’s “Silicon Valley”, but not entirely without justification. By the end of 2011, no less than 600 high-tech companies had congregated in Tech City and more are arriving almost by the week.

The attractions of London for these fledgling operations appear to be almost irresistible. On one side, immediately north of Hoxton, is the historic banking district – the City – with its deep pockets to help fund such firms while on the other is the site for the 2012 Olympics with its vast array of related developments that are transforming the appearance and prospects of east London, long a run-down area. Nothing if not ambitious, Prime Minister David Cameron wants Tech City to become “one of the greatest technological centres in the world.”

And he may not be exaggerating. Just three years ago, Tech City boasted barely a score of start-up companies. At the start of 2011, there were about 200. By the end of the year, that number had trebled. The growth of Yammer seems to be fairly typical of the general rate of expansion. Nine months ago the Yammer outpost had just three employees. By late 2011, it had 40 and expects to at least double that number this year.

Thinking big
A classic cluster of like-minded companies is clearly occurring on a significant and rapid scale in the area. Yammer’s neighbours include internet radio group Lastfm, Twitter subsidiary TweetDeck and Mind Candy, the creator of kids’ site Moshi Monsters, and Solid State, a distributor of electronic components. Such has been the rush to Tech City that developers are rushing to catch up with the demand for office space. All relatively recent start-ups, these companies are overshadowed by longer-established new-economy communications giants such as Cisco Systems, Vodafone, Qualcomm, Intel, Facebook and Amazon. Another new revival is Google, which last year rented a seven-story office in Tech City where it’s working on a series of innovative products. Groupon, the king of online discount companies, moved its 700 UK staff there around the same time.

The breakneck growth of London’s Silicon Valley must be rather galling for the original one in northern California, which had a much longer period of gestation. It started building its reputation for pioneering work in electronics as far back as the early 1900s when Lee De Forest invented a vacuum tube called the Audion and Hewlett Packard pioneered oscilloscopes for testing electronics. And it took another 70 years before the current title caught on, following a series of newspaper articles.

Incentives
Although the UK government has been under fire for allegedly favouring the old-economy City, also known as the Square Mile, that has been the home for, first, goldsmiths and then banks for some 800 years, it is certainly pulling out all the stops to entice these new-economy companies. Courtesy of Her Majesty’s Customs and Excise, they benefit from a tax regime that allows hefty write-offs for investments in R&D. As Tech City’s manager Eric van der Kleij points out: “The government keeps its margin but isn’t greedy.”

In other ways the authorities bend over backwards to make life easy for new arrivals, for instance by reducing red tape to a minimum (an initiative applauded by entrepreneurs from Europe where the paperwork is generally much more onerous), organising networking sessions for Tech City companies to get together, and even through the provision of a “landing” service that provides advice and assistance for newcomers in finding offices.

“They looked after us fantastically well,” Aitor Grandes, founder of Spanish start-up 24 Symbols, a site for downloading books, told newspaper Expansion. “They even showed us how to register a company in Britain and how to open a business account.” The first Spanish company in Tech City, 24 Symbols expects to open up this year.

In with the new
London’s position as a hotbed of venture capital is also an attraction for this new wave of companies hoping to become tomorrow’s commercial giants. Some 200 firms, most of them based in the City, are looking to pump money into promising start-ups. According to the latest available figures from the British Venture Capital Association, an organisation that includes private equity houses, cleantech is the most popular funding target, with software second. Their average individual investment in 2010,was £790,000.

To the surprise of some of the new arrivals at Tech City, they have discovered they are joining many other homegrown, venture capital-funded companies already based in London. They include online movie company Lovefilm, fan-to-fan ticket exchange Seatwave, radical printing company MOO.com, one-stop fashion boutique site Farfetch.com founded by Portuguese entrepreneur Jose Neves, and notonthehighstreet.com, the fast-growing retailer. Only the US can claim more venture capital-backed companies than the UK.

As a vast commercial hub of 7.5 million people, Greater London has always been a magnet for companies of all kinds, but the launch early last year of London & Partners by Mayor Boris Johnson, a politician, journalist and author, has hurried things along. Established for the express purpose of promoting London as the world’s foremost city for visiting, studying and, above all, investing, London & Partners will formally take over the role of the London Development Agency in early 2012 but is already active. Last year, for example, the new agency brought 130 new companies to London – 20 to Tech City with the rest scattered all over the metropolis.

The Olympic effect
Belying his intellectual image, Johnson has used the Olympics as a showcase to vigorously promote the economic attractions of London as a gateway to Europe to non-banking sector companies in cleantech, software, engineering and other industries deemed suitable for a densely populated area. London & Partners claims to have already leveraged the Olympics into 5,000 permanent new jobs.

The imminence of the Olympics, which take place between July 27 and August 12, has also triggered a flood of capital for regeneration and new building projects and infrastructure that has not only spruced up the appearance of London but made it a more congenial environment in which to live and work. The underground rail system, once a byword for discomfort, and scores of dilapidated stations have benefited from billions of pounds of new money, while the bus and overground rail networks is much more efficient than it was a decade ago.

Simultaneously, the environment of Hoxton and neighbouring Shoreditch has been transformed with new restaurants, shops and entertainment as well as hundreds of modern apartments. For many, the Renzo Piano-designed, all-glass building known as ‘The Shard’ has become the symbol of a resurgent capital. Towering 310 metres above the London Bridge area (which is also getting a face-lift), it boasts 95 levels and will be the Europe’s loftiest building when it’s topped off in a few months.

Meantime Mayor Johnson has a long shopping list. In November he despatched a mission to China to woo businesses to the city, or rather more businesses because London already claims at least 60 companies from the Heavenly Kingdom, many of which arrived only in the last three years. Some of China’s best-known brands are located there, including Alibaba.com – ‘China’s Amazon’, computer graphics group Crystal CG, appliance manufacturer Haier and advertising group Xiking among others. Indeed China is already the third largest foreign director investor in London and, if anything, the number of arrivals is growing. Last year saw a 20 percent increase in Chinese companies locating there.

The mayor’s office is also behind a massive investment in digital infrastructure. The city is being wired with 4G as the bedrock of a strategy to turn it into Europe’s ‘digital capital’ by the middle of this year. In this, London already has a head start here – it is home to three times as many software and IT companies than any other European city.

This splurge of capital is clearly producing dividends. In the latest Best Business City in Europe survey by consultants Cushman & Wakefield, London came out top, ranking first in six of the twelve categories. Specialist publication fDi magazine points out that “London has attracted more than one third more foreign direct investment projects over the past five years than any other European city.”

Within the folds of the mega-city, Tech City is developing a momentum all its own. “It’s a great time to be an entrepreneur in London,” enthuses Oscar Jazdowski of Silicon Valley Bank, a major lender to the technology and venture capital industries that is seeking a full banking licence there. “It seems that you can’t move in Shoreditch for bright and ambitious tech CEOs harbouring dreams of becoming Europe’s answer to Bill Gates, Mark Zuckerberg or Steve Jobs.”