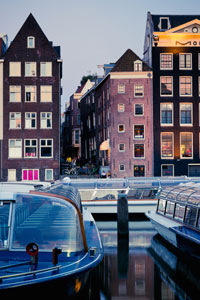 It’s barely been five minutes and already an armada of bicycles is whizzing past me. Clearly I’m not in Kansas anymore, but in the Netherlands – a country that seems pleased as punch to do everything a little bit differently. And for good reason. Amidst a plethora of seemingly identikit European countries, the Netherlands feel fun and unique, as from its legal sex and drugs industry to the abundance of tulips on every corner, there is nothing ordinary about it.
And thus a journey of discovery begins.
Sex, drugs, bridges and bicycles
As the country’s largest city, Amsterdam is a great place to get started. It is located in Holland which, contrary to popular belief, accounts for just 13 percent of the entirety of the Netherlands, yet which also incorporates the major towns of Rotterdam and the Hague.

Amsterdam is arguably the most planned city in northern Europe and was the centre of world economy in the 17th century. Today it is a city of contrasts; trundle through it by day and you’d be forgiven for thinking you’d landed in toy town. Intricate and ornate, it is the optimum blend of old-meets-new, with striking modern constructions standing side-by-side with centuries-old homes on dinky cobbled streets. The good news is that most of the top sites are located within walking distance of one another, so it’s easy to pack numerous architectural gems into one day.

A Venetian aura is omnipresent too, with water and waterways providing much of the focus for daytime. A chug on one of the canal boats makes for an interesting alternative for business or pleasure, as nothing beats a board meeting on-board or a leisurely drift as you soak up your surroundings. The Magere Brug, a traditional double-leaf drawbridge, connects both sides of the Amstel River. The once ‘skinny’ bridge put on a few pounds in 1871 when it was preplaced by a heartier model that could better handle the traffic. Today it’s worth waiting out the twenty-minutes between lifts when the bridge masters let boats through, and the experience is especially magical at night.

There’s plenty of cultural history to get lost in too. For starters, the Van Gogh Museum houses some 200 paintings and 550 sketches by the native artist, making it the largest collection of his works in the world. It is accompanied by hundreds of letters that he wrote, as well as several artistic pieces by his friends and contemporaries; many happy hours can be spent meandering between colourful masterpieces. Meanwhile, it’s certainly an excellent place to immerse yourself in a Dutch dilemma as you debate on whether he did, or didn’t, chop his own ear off.

Another beloved attraction is Anne Frank’s House, located in the city’s core. Renowned as the space where the young teenager penned her bleak diary that offered a window onto her war torn world, it certainly leaves an unforgettable impression of what her existence must have been like. The original diary is on permanent display as a stark reminder.

Of course Amsterdam is anything but doom and gloom, and is notoriously renowned as one of the most hedonistic spots in Europe. After nightfall the innocence of toy town evaporates in an instant, only to be replaced by the city’s vibrant (and legal) sex and drugs world, which has morphed into a multi-million euro industry fuelled by tourists.
It is here that Amsterdam shows its true, raunchy colours. From brothels and stag dos to sex shops and museums, the Red Light District leaves nothing to the imagination. You’ll doubtlessly have heard about the working girls pressed up against their glass-fronted rooms, and the live sex shows that play out wildly and, to be honest, it is all completely true.

So throw your inhibitions to the wind and take comfort in the fact that this aspect of the city’s character has thrived since the 14th century. As the oldest profession in the world, the government chose to legalise prostitution in 2000 and all of the women vying for your attention are legislated, tax-paying members of society. Sure it is a fine line between shock tactics and rip-roaring good fun, but as you share the pavement with a gaggle of women on a hens’ night and a pack of men ogling at the array of what’s on offer, you might as well enjoy it.

Back in the cold light of day, hop on a bike to nurse that hangover. Cycling anywhere in the country is something of a obsession in these parts and the terrain is perfect for it. With a lack of parking spaces and the desire to be eco-chic, young locals wouldn’t be caught dead without their bike. In fact, they probably have at least two of them; resulting in a mammoth industry with nearly 1.3 million new bikes purchased every year.

You’ll find it easy to launch your own two-wheeled adventure as most train stations offer bike-hiring facilities. Cycling here is a pleasure thanks to constant supply of bike trails that keep you safe, and you can pedal on flat land for hours without breaking much of a sweat. Many of the trails lead through quaint cobblestone villages, each with their own fascinating history. Haarlem, a city located 21 kilometres from Amsterdam on the North Sea coastline, is well worth a visit. And if you’re around between the months of March and May, the renowned open-air Kuekenhof flower show is blooming marvellous, and annually captures the attention of top botanists and flower traders. After all, the country didn’t secure its reputation as a nation enveloped in tulips for nothing.

Meanwhile, keep your eyes peeled for windmills as you catapult along. Although they are another of the country’s clichés, they are still in practical use for drainage and milling purposes – although they are admittedly more of a tourist attraction these days.

Next port of call
If you fancy staying on the saddle for a little longer, you could choose to travel on two wheels to visit one of the world’s busiest working ports. Now, this could be Rotterdam, or anywhere… but, well, it is in fact Rotterdam, the Netherland’s second largest city.

Over the years the city grew from a humble fishing village on the banks of the River Nieuwe Mass into an international hub of transport, trade, industry and distribution. Sadly, Rotterdam lost much of its old-style architecture when it was bombarded early on in World War II, but it certainly hasn’t lost its charm. Today it looks a little different to the rest of the country, with towering skyscrapers and contemporary buildings on every street. Construction is a way of life here and shows no sign of slowing down, and with a population of over 600,000 it can’t really afford to.

Nevertheless it is a city with a very bright and cosmopolitan feel to it. The port, of course, is a must, as with a throughput of over 300 million metric tonnes every year, it is a sight to behold. Very in keeping is the interactive Maritime Museum with its impressive collection of over one million maritime objects including ship models, navigational instruments and furniture.

But there’s more to Rotterdam than just water-based endeavours; it is an extremely cultural city that has also worked to cultivate the fresh entrepreneurial spirit of its young residents. For instance, the Boijmans is the only museum in Holland to cover the 14th century to the present in one fabulous art collection, and you can expect everything from a delicate painting by one of the Old Masters, to a contemporary focus on industrial design.

Meanwhile, the Kunsthal Rotterdam presents culture in the wider sense of the word, with vibrant exhibitions that combine old art, new art, design and photography. The aura here is extremely experimental, and on any given day you can expect to find Leonardo da Vinci’s work mixed in with pop art and some strategically placed lingerie. Naturally, this extraordinary approach extends to the building itself, which is very much an attraction in its own right.

Not to be outdone by the capital, the nightlife in Rotterdam reflects its vibrant attitude too. Here late-night clubs, bars and chill-out lounges line the city’s attractive streets. Kop van Zuid, Delftshaven and Stadshuiplein are all areas particularly known for keeping energies high well into the early hours. Of particular interest is Watt, the world’s first sustainable dance club, which features water-saving toilets and a solar-powered roof lounge.

The spirit of compromise
Making up the trilogy of Holland’s main cities is the Hague. Once the Dutch capital, it has remained the seat of the country’s coalition government and the residence of its Queen. It is known as the ‘judicial capital of the world’, with numerous international courts located here, including the International Criminal Court and the International Court of Justice.

This is definitely the most serious of the three city sisters, but don’t let that detract from its historic, cultural and political pulls. Far removed from the relaxed waterways of many other Dutch cities, the Hague’s polished avenues give it a continental edge that’s echoed through its baroque and classicist-style buildings.

Meanwhile, in the stylish Statenkwartier district, the Vredespaleis is an icon to the country’s commitment to peace. Known as the Peace Palace, it was constructed in 1913 as a place where international disputes could be settled; ironically, World War I broke out just one year after it threw open its doors for the first time. Today it determinedly fulfils its destiny, as the International Court of Justice.

And there, in the halls of a building vying for peace, one can succinctly sum up the prevailing feeling that sticks with you after a visit to the Netherlands – one of compromise. From its coalition government and its progressive stance on many contentious issues, to its ability to combine a thriving sex and drugs industry with the picturesque atmosphere of dinky Amsterdam, you get the impression that the Netherlands really is out to please.

And in a marvellous flurry of art, history, bicycles and brothels, it succeeds.