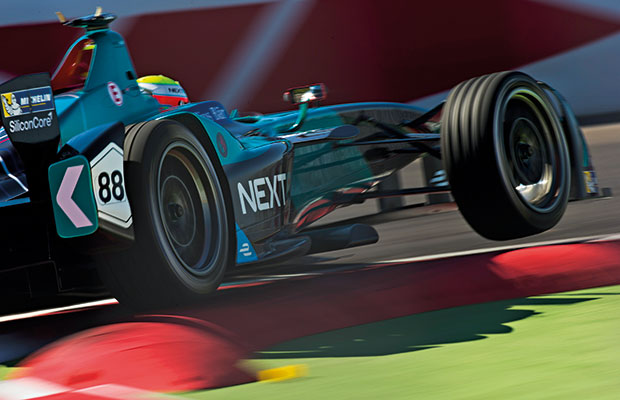 Hong Kong should be an awful location for a motorsport event. Its notorious traffic jams would be made even worse by the closure of streets, while the sound of high performance engines would make offices near the track unbearable to work in.

Yet in 2016, 30,000 people attended the opening round of the 2016-17 Formula E series to watch reigning champion Sébastien Buemi clinch victory at the Hong Kong Central Harbourfront Circuit. The rest of the season, which will conclude in July, will include events in Paris, Berlin and, incredibly, a double-header in Brooklyn, New York.

Over the course of its short existence, Formula E has emerged as an international motorsport event in reach of cities that could never afford or manage the infrastructure needed for a Formula 1 race. A mix of modern values and changing tastes has made the series a desirable and trendy event to host – and with a new season in full swing, the motorsport community’s eyes are fixed on its future.

Lighting the fuse
The development of the Formula E championship was announced in 2013 with backing from the Federation Internationale de l’Automobile, the governing body responsible for a number of international motorsport series, including Formula 1.

Formula E’s launch attracted substantial interest from sustainability campaigners, with US actor and environmental activist Leonardo DiCaprio becoming a partial owner of the series’ Venturi team. The series also promised the revival of one of Formula 1’s greatest rivalries: four-time Formula 1 world champion Alain Prost took up a management position at the Renault e.dams team, with his son Nicolas Prost named as a driver, while driving for the Mahindra team was Bruno Senna, nephew to the late three-time Formula 1 champion Ayrton Senna.

Significantly, the debut season would visit some stunning locations including Punta del Este, Miami and Buenos Aires, before finally finishing on the streets of London. Monaco also made the calendar, although on a version of the track substantially shorter than the Formula 1 circuit.

Now in its third season, Formula E touts itself as the future of motorsport. The cars are single-seat, open-wheel machines similar to those driven in Formula 1, but the comparisons end there: Formula E cars are fully electric, sound- ing more like a life-size remote control car than a typical racing machine. To encourage aggressive racing, and because the cars are not able to reach the speed of their Formula 1 counterparts, the series races on short, challenging street circuits full of 90-degree bends and hairpin turns. The series aims to further develop electric vehicle technology, increase interest in electric cars and promote sustainability.

Many of the cities that have held a Formula E race would have found hosting a Formula 1 event a borderline impossibility; while Formula 1 does race within city limits at locations such as Mexico City, Singapore and Monaco, the space requirements, expense and disruption that goes along with hosting an event place it out of reach for many municipalities. Formula E’s more compact format makes for far less of a logistical challenge.

Attracting big money
The value in a city hosting an international motorsport event is not just measured in ticket sales: for many cities on the Formula 1 calendar, tourists who visit later in the year after being wooed by the destination are also used to justify the cost. This is difficult to measure, leaving many races’ futures in a seemingly constant state of doubt as cities struggle to justify expenses. But while attracting a smaller audience, Formula E races are far more affordable.

Speaking to Business Destinations, Ed Valentine, a Formula 1 analyst at sportseconomics.org and motorsport analyst at Opta Sports, said the average cost of hosting a Formula 1 event is around $28m; a substantial increase over Formula E races, which cost between $250,000 and $1.5m.

In addition to the lower hosting fees, Valentine said Formula E racetracks are far easier to design and construct: “For Formula E it’s just a case of zoning out a couple of square kilometres of the city and closing it off for a day, because qualifying and the race are on one day.” Formula 1 races, on the other hand, have the cars on track for three days. Valentine added: “The [Formula E] races are also on street circuits rather than purpose-built racing facilities, so it provides great exposure for a city. You don’t really get that with Formula 1 because they are generally at purposely built race circuits that cost hundreds of millions of dollars.”

Paris hosted a Formula E event in 2016 on a track that circled the Musée de l’Armée, just a short walk away from the Eiffel Tower. Coverage of the race included stunning vistas as the drivers navigated the historic city. In comparison, a return of the French Formula 1 Grand Prix has been negotiated for 2018 at the comparatively rural Circuit Paul Ricard, located near Le Castellet in the south of France. While undoubtedly still a beautiful part of the world, the spectacle simply isn’t the same.

Another undeniable appeal of hosting a Formula E event is the sustainability credibility it lends to a location. “A lot of cities want to see themselves as clean and carbon neutral, so it’s more outside of the kind of glamour that attracts cities to hosting Formula 1 events”, Valentine explained. “I did hear recently that something like 120 cities around the world want to host a Formula E race. You certainly won’t have that for Formula 1.”

With the future in sight
There is no better evidence of Formula E’s improving fortunes than the race scheduled to take place in Brooklyn in July: under the gaze of the Statue of Liberty, drivers will race around a circuit set out next to the Pier 11 building and Brooklyn Cruise Terminal. Formula 1 has been attempting to organise a similar race in New Jersey since 2011, but negotiations have ultimately proven fruitless.

Valentine said holding a race in such an influential neighbourhood is a real coup for the sport: “It’s slap bang in a city that’s mentioned in movies, and it will no doubt attract those kind of people to the race. To me, Formula 1 could never do it. These kinds of massive cities, their value can really make or break the calendar.”

However, for the sport to continue to grow, there are some shortcomings the series needs to address. Despite the lower cost, Formula E is not highly lucrative for the cities that host it, according to Valentine: “While the hosting fees are a lot lower, the ticket entry prices will be a lot lower. Last season, when the races were at Battersea Park in London, the average ticket price was about £20 [$25]. Compare that to about £100-£150 [$125-$185] for a Formula 1 event.”

Additionally, the Formula E series is yet to prove it is financially sustainable in the long term. In the year ending July 2015, Formula E posted a loss of £43.8m ($53.6m). The series is also limited to a certain extent by the current shortcomings of electric cars: the batteries that are used last for only half a race, and with no quick way to change or recharge them, drivers simply have to jump into a second car during a pit stop. While technological development is one of the goals of the series and organisers anticipate this will change in the future, it’s a compromise not often seen in top-tier motorsports.

electric cars started the inaugural
race in Beijing in 2014

The maximum energy
restriction during races

Another controversial decision has been the inclusion of FanBoost, a system that allows spectators to vote for their favourite driver. The winning motorist receives a five-second ‘boost’ to use during the race. This system was designed to offer an incentive for drivers to make more of an effort with fan engagement, but to some it dilutes the purity of racing. Valentine said, in his personal opinion, he agrees FanBoost is a bit of a gimmick, but noted that it does create more overtaking opportunities while attempting to reach and engage with the audience that the series is targeting: younger people.

Bringing in brands
In order to succeed further, Valentine said Formula E needs to attract some of the brands Formula 1 has courted over the years. Not only would this make the series more glamorous, but high-value brands would also provide substantial advertising revenue.

Jaguar, Audi and Renault currently have a presence on the Formula E grid, but Valentine said this is still not enough: “It needs to attract brands such as Ferrari, Red Bull, Mercedes, and some of the road manufacturing brands, like Porsche and Volkswagen. If it can get these brands on board and find out some more revenue streams, like a Formula E racing game, I think its has the potential to go skywards.”

Despite this, Valentine said he doesn’t think Formula E will ever overtake Formula 1 as the world’s premier motorsport division. “Formula 1 just has a history that Formula E will never have. It has the lifelong brand of Ferrari, which even if Ferrari did go to Formula E, which would be a massive positive, it would never outgrow Formula 1.”