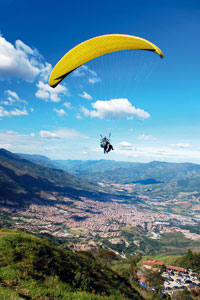 A warm glow that alludes to siestas, sunburn and slow traffic teases my eyelids as it glints off the buildings in the centre of Bucaramanga. The thick, humid air dampens a constant hive of activity that makes up the formal and informal economy of Colombia.

This is what I experience at the end of my day, alas not in person, but through the joys of global networking as I sit in my wintry apartment in Europe discussing the finer points of starting a business abroad with a young British entrepreneur. One who, at this particular moment, is lucky enough to be soaking up the early afternoon sun in Colombia – a land that holds not only economic potential, but the promise of continuing warmth too!

Whilst travelling around South America and eventually ending up in Colombia, Tim Woodhouse met his business partners; Londoner Milo Butterick, and Colombian counterpart Richi Mantilla, owner of Colombia Paragliding (colombiaparagliding.com). Combining their local and foreign experience they saw a gap in the tourist market for a hostel (www.kasaguane.com), in Bucaramanga, with a focus on the promotion of local guides and tour operators. The area boasts plenty of hotels, but for the more economically constrained traveller, or those wishing to stay for longer periods of time, they found little on offer.

With ten universities, a high percentage of poverty and a history of relative peace, Bucaramanga is situated 50km from the world’s widest canyon Chicamocha. The area is the perfect tourist destination for explorers, extreme sports enthusiasts, and cultural magpies. Slowly, after crime and kidnapping headlines sent many travellers to safer shores, the tourist industry is beginning to thrive.

The big picture
The partnership of social and economic inequality, and despite internal unrest and upheaval, has improved Colombia’s image. Visions of South American travel as articulated by the diaries of Ernesto ‘Che’ Guevara, the Rum Diaries and Paul Kemp on the big screen have have increasingly inspired travellers and writers to explore this part of the world with a sense of wonder.

It is unsurprising then that we see a generation of socially concerned visitors and tourists making an impact in Colombia and the broader continent. Those who wish for hot sea, blinding sun and sand in their sandwiches are increasingly seeking the opportunity to share their fortune with the country’s population.

Informal settlements have sprung up all over Bogota, the Capital of Colombia. Areas like Civdad Bolivar had an estimated population of 340,000 in 2011, a number that represents only the calculable residents. A third of this population is classified as youth lacking education, employment and opportunities.

Colombia brims with governmental promises to develop the country’s infrastructure, create more jobs and make Colombians less dependent on the informal economy. However, the support for basic services in the more disposable sectors of cities such as Bogotá continues to be more visible in rhetoric than on the streets.

Communities, hardened by the harsh realities of life at the bottom of the economic scale, have therefore taken the responsibility of essentials such as education and access to water and electricity onto their own shoulders. Violence, especially youth violence, however, continues to be an issue that even they can’t control on their own.

In Bogotá’s infamous Ciudad Bolivar, the existence of, and reliance upon, the informal economy expresses how, as with many developing countries, the reality of an urban centre’s ability to deal with mass rural exodus is limited. In this case there began an exponential migration from the countryside into urban centres after the 1950s. Succeeded by the popularisation of economic opportunities offered by cities, the huge number of displaced peoples in cities like Bogota can be mainly attributed to contemporary tides of violence. Whether due to the decades-old political » disputes between the FARC rebels and the government, or the drug militias, safety in rural environments is continually threatened.

The lack of jobs and infrastructure for the growing population, which is re-shaping the boundaries of the city through informal settlements, leaves a high proportion of youth living under the poverty line, with a void of time and few activities.

Social disruption in this way has led to the birth of projects that work with young people from volatile backgrounds and aim, in many cases, to teach them the importance of respect – respect for the community and for themselves – instead of mimicking their experiences of conflict and violence.

This is where new tourist orientated businesses offer visitors a sun-scorched, work-calloused chance to make a difference. As an information hub for travellers, owners like Tim can direct people to the most reliable and socially responsible tour guides, or in the long run, facilitate networks for volunteers to share their skills and time to local projects.

In Cartagena, a touristy coastal city, it is common to find backpackers moving tortoise-like through the streets. Shells discarded, you’re likely to later see them being tackled repeatedly by the swift bare feet of young footballers; that global language spoken with individual personality the world over.

Tourism with a twist
Recognising the global importance of the sport in creating community, Tiempo de Juego is one of a number of social projects that aims to turn the heads of disadvantaged youth to sport and education. Away, hopefully from the essentially short-lived alternatives of violent gangs, drugs and the Cartels.

Esteban Reyes, Director General of Fundación Tiempo de Juego, believes that with the right attitude and serious commitment, international involvement in such projects can be beneficial. To avoid counter-productive effects however, volunteers need to be more than fly-by-night angels of empathy. People are therefore expected to offer a minimum commitment of a month, whist others may stay more permanently or return on a regular basis.

More than anything, Esteban sees the potential for international interest giving local youth new opportunities: “The children of Tiempo de Juego have never travelled out of the country. Any initiative and support to bring them to know different cultures, or to participate in international sportive activities, would be of a very great impact.”

He invites anyone who is interested in coming to Colombia and volunteering with them in Bogotá or Cartagena to write to their volunteer programmes coordinator, Anamaria Guerra, (ana.guerra@tiempodejuego.org). Or find them at www.globalgiving.org/projects.
There is hope that the future of increased tourism to Bucaramanga could extend the network of both social projects such as Tiempo de Juego and the national and international volunteer network. Supporting this potential is the attraction to local extreme sports venues; the Colombia Paragliding school and the premier sports climbing destination in Colombia; Boquete de la Mojarra, Santander are both on the doorstep.

Boquete de la Mojarra, as a climbing area, is still young and being developed, but on a national and international level is already highly regarded. Taking advantage of this, local guides and instructors benefit from sports tourism, which is continually growing in popularity. Through the expansion of sports tourism in the area and the relevant infrastructure, the door is being opened for young people to attain employment and respect in the community.

With expatriates, like Tim, hoping to strengthen links between the global sports and travel communities and local experts, sites such as Boquete de la Mojarra will continue to develop, potentially leading to a situation in which freedom of movement around the global scape is more accessible for those worst affected by economic inequality.

There are many ways to travel physically; by bike, plane or camel, and there are many ways to travel cognitively; for work, pleasure, business or both. We should use this freedom to better understand the complex social and political systems underlying our jungle excursions and luxury voyages. This makes it better possible to enjoy the subtle beauties of human interaction and creativity – which surely form the foundations of any good experience abroad.