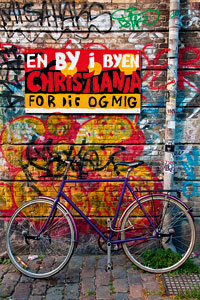 In parts, it has the atmosphere of a village from bygone days where people greet each other and children play happily in the car-free streets; an oasis of tranquillity with trees and abundant plant life, bound by water and peppered with an eclectic mix of colourful dwellings. But this is not a snapshot of life years ago; this is the twenty-first century in the centre of a major cosmopolitan capital city.

In the heart of Copenhagen is the self-proclaimed Freetown of Christiania, famous for being one of the biggest and oldest squatter movements in the world. It has developed today into a semi self-governing state within Copenhagen, having celebrated its 40th birthday late last year, it lays claim to being one of the longest-existing alternative societies in the western world. But it has not all been rosy for Christiania, which has been a bone of contention since its establishment in 1971.

Throughout the years, it has courted controversy, revered by some as a successful social experiment and abhorred by others as a criminal drug den. Not only that, but it also occupies valuable land, ripe for redevelopment, in the heart of a capital city.

Christiania was established on a disused eighteenth century navy barracks in the 1970s and, in spite of its turbulent relations with the government, has grown, not only into a popular residential area – there are about 30 to 50 applicants for every room that becomes vacant – but also one of Copenhagen’s major tourist attractions. Visitors include tourists to » Copenhagen, intrigued by this unique area, as well as business people wanting to show clients a different side of Danish society and groups of Danish primary school children being taught about alternative ways of living.

Christiania sees itself as a free haven for those who do not want to conform to Danish society, and has attracted many artisans, idealists and intellectuals as well as the much-publicised homeless people and cannabis users. Today, Christiania has a hedonistic atmosphere, with a lively and diverse centre full of restaurants, cafes, a cinema, nightclubs, shops, museums and music venues, such as Musikloppen, which attracts musicians from around the world, as well as the infamous Pusher Street where cannabis is openly available to buy. The centre of Christiania is also characterised by multi-story apartment buildings, adorned with colourful murals, and towering life-size statues of Buddha next to massive sculptures made of recycled materials. Moving outwards from the central area, Christiania becomes more forested, with idiosyncratic houses peppered along the water’s edge or in clusters forming the individual neighbourhoods that make up many of Christiania’s micro-societies.

Christiania is divided into 15 different areas, which have monthly meetings to make their own local decisions, while bigger meetings are held for any issues that affect the whole community. Residents govern themselves by consensus, and there is no single prime minister or president, instead every adult resident having an equal participation in the governance of Christiania. It even has its own currency, the Løn, which is paid to all who work there and is accepted in all Christiania’s businesses, although the Danish Krone is also accepted. Christianites pay income taxes to the Danish state, and pay for electricity, water and waste disposal. It all sounds like an amazing success story for those proponents of alternative living, but although Christiania has survived 40 years, its history is studded with conflict and constant threat of eviction.

Christiania’s story starts in 1971, at a time when there was a severe lack of affordable housing in Copenhagen. With rental and purchase prices soaring, many apartments remained empty. The Danish military had also left a former 18th century navy fort, and squatters started to move in. At first, the fences were brought down and the area was used as a playground for children, but in 1971 a group of around 700 radical free thinkers, anarchists, idealists and hippies moved in and decided to create an alternative society based on communal living and freedom, a self governing society “whereby each and every individual holds themselves responsible for the wellbeing of the entire community”, according to its subsequent mission statement. While the occupation of privately owned houses was soon made illegal, the government was unable to force the occupants of the military terrain out of the area, and it then agreed to recognise Christiania as a ‘social experiment’, allowing the squatters to stay.

However, a change in government later in the 1970s led to its status as a social experiment being withdrawn, and decades of legal battles followed. Christiania’s open tolerance of the illegal selling of cannabis has been a bone of contention with successive governments since its creation. Although illegal in Denmark, the government for many years did not stop the trade of the drug in Christiania with some officials believing it was better to concentrate the drugs trade in one area.

Christiania’s conflicts were not all against the state. There were also internal troubles. Despite its stance on soft drugs it has never sanctioned the selling of hard drugs, but heroine and speed spread to its terrain in the late 1970s, and some gangs used Christiania as a hideout to protect them from rival gangs, bringing violence to the area.

The authorities tolerated Christiania’s cannabis trade until 2004, after which followed years of government attempts to introduce measures to “normalise” the legal status of the community, which result in considerable conflict. In 2001, a Liberal Conservative government came into power and pledged to end the sale of cannabis in Christiania and to redevelop the area. The government planned to invest around 300m krone in the refurbishment of the historic military buildings and sell off the rights for property development. But this was met with significant resistance, not only from Christiania residents but also people who lived in Copenhagen itself, and around 7,000 people protested against the move. In 2004 heavy-handed police raids were carried out, reputedly to rid the area of hard drugs. Cynics, however, believe the police actions were more likely driven by the state’s desire to reclaim Christiania for real estate development.

Covering 85 acres of greenery and canals just a short walk from the centre of Copenhagen, Christiania occupies a veritable real estate treasure chest. As time went on police raids became more frequent often leading to violent clashes with residents and other Christiania sympathisers. One of Christiania’s recent flashpoints was in May 2007 when the government decided to demolish an abandoned building in Christiania. Residents feared it was the first step towards forced eviction. They built roadblocks and attacked trucks transporting the remains of the building. The police retaliated by sending in more forces who were pelted with stones, fireworks and Molotov cocktails. Eventually the police retreated.

Court proceedings against the residents were initiated, and continued for several years, with the Supreme Court upholding a 2009 ruling that the state held the legal right to the land occupied by Christiania. Just as the balance seemed to be tipping in the state’s favour and media headlines shouted of Christiania’s certain demise, a deal was struck to allow the commune to continue to occupy the area but in a more “legitimised” form. The government agreed to shelve its plans for the building of roads and property in the area and allow the community to buy property at a rock-bottom price of 3,500 krone per square metre, well below market value, and to rent the remaining land from the state at a fixed rate. Christiania was also permitted to maintain its system of communal land ownership and remain autonomous in certain areas from the Danish state. This 76m-krone real estate deal between the government and Christiania finally gives residents the right to stay on the property where they have been squatting under threat of eviction for forty years.

The agreement involves the development of a fund to allow residents to buy most of the squatted land. Under the deal with the government and in true keeping with the founding principles of Christiania against private ownership, Christiania’s residents will remain as tenants with the fund conducting the transaction with the government on their behalf. A first instalment of 46m krone is due on 15 April 2012, with the remaining money due in instalments over the next six years.

To raise the money for the fund, Christiania is selling shares, although these shares do not give purchasers any of the rights of traditional shareholders. According to the Christiania Folkeaktie website, the shares, affectionately known as people’s shares, “are to be seen as donations supporting the buyout of the Freetown and as such worth more than money”.

So after years of wrangling with the government and fighting against the police, finally Christiania has been given a way to legalise its Freetown, and can now live without the fear of eviction. And it looks like the property developers will have to move on.