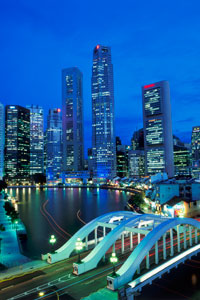 Ask anyone what they know about Singapore and you might not get a very wide variety of answers: it’s the place where chewing gum is banned, the home and namesake of an incredibly potent cocktail, a thriving business destination on the international map. If you’re lucky, you might hear about the excellent hotel facilities and relatively stress-free and pleasant airport. Oh, and it’s humid.

Things are changing. After years of being seen as a relatively bland place with a great transport system and very little culture, Singapore is evolving into one of south-east Asia’s hottest destinations and the perfect place to mix business and pleasure.

Little-heralded Sentosa Island is the pleasure-seeker’s paradise and home to beaches, blue skies and another world for those looking to escape the hustle and bustle of the metropolis. Only a short drive from the city the highways disappear, replaced with 3.2km of beaches; beach resorts pop up instead of sky high hotels and the people exhibit a different, more laid back way of looking at things. The name Sentosa means peace and tranquillity in Malay, quite fitting as this is what the island hideaway exudes.

Tranquil tides
Chilled out doesn’t get much cooler than the international hotspot Café del Mar – this restaurant, bar and club rolled into one is a great spot for a few sundowners and a chance to scope out Singapore’s hipper and sleeker crowd. The longer-running Coastes is an incredibly diverse venue which – unlike Café del Mar – is also suitable for those with children. Lounging on the sunloungers or dipping in the water is about as much activity as you’re going to find at Coastes during the day. That or trying one of their tasty delights cooked on a grill or in the wood-fired oven. However, at night, the venue turns into a laid-back dance spot for the amiable clientele.

As nice as the five star tower hotels with stunning views are, it’s always good to take a break and try something a little different. Newly opened Capella Singapore on Sentosa has fast established itself as Singapore’s must-stay destination with its five star blend of contemporary and colonial décor. The rooms are the most spacious in Singapore and feature mod cons such as 48” plasma televisions, iPod docking stations and funky bedside touch screen control panels to control the essentials such as the lighting and curtains.

Island life is not restricted to Sentosa: Pulau Ubin is almost completely off the tourist trail and is one of the few places in Singapore that has almost completely escaped the urban sprawl that typifies much of the rest of the state. Local folklore has it that the island was created when a pig, elephant and frog challenged each other to a race, with the condition that whoever lost it would be turned into stone. None of the three reached the coastline and the pig and the elephant were turned into Pulau Ubin, while the frog became Pulau Sekudu to the south.

Even though it’s only two kilometres from the coast of the city and a 10 minute boat ride, Pulau Ubin is like another world. Ignoring the unsightly granite quarries, there are a variety of plantations on the island, which produce crops such as coconuts, coffee and rubber to trade internationally. The island’s traditional kampongs (villages) are a reminder of what the whole of the state was like before it was grasped by the hands of development.

There are no sights to see as such; Pulau Ubin’s charm lies in its unhurried potential for discovery. Rent a bike or don some sturdy walking shoes and set off along trails through coconut groves, rubber plantations and mangroves or just laze on any of the countless small, uninhabited beaches.

At low tide it’s possible to walk along the boardwalks over to the Chek Jawa Wetlands. This relatively small area contains six different ecosystems: coastal forest, mangroves, sandy shore, rocky shores, seagrass lagoons and coral rubble; therefore visitors can see a huge diversity of flora and fauna that is no longer found elsewhere in Singapore.

Back on the mainland, too little notice has been paid to the unique blend of different cultures past and present that typifies the country today. The continuously merging Chinese, Malay and Western cultures have forged the path for the development of the Singapore we know today.

The Asian Civilisations Museum is an enlightening way to spend an afternoon: it looks at the different Asian societies that make up the majority of Singapore’s population. Covering an impressive 14,000sq m, the exhibit ranges from China to India and the rest of south-east Asia and profiles their unique influences through a series of 11 galleries.

Consumer paradise
Chinese and Malay culture is not too hard to find in Singapore; however, the Muslim Quarter or Kampong Glam is a unique concentration of the state’s Islamic population. The Sultan Mosque is Singapore’s largest mosque and the best example of Islamic architecture in the area.

Elsewhere in the quarter, the old palace (Istana Kampong Glam) of Sultan Hussein Shah, the 17th Sultan of Johor, is an intricately designed and much-visited landmark that combines traditional Malay designs with a Palladian colonial style. The building is now home to a museum of Malay culture and society, the Malay Heritage Centre.

Singapore and shopping go hand in hand and it’s undeniable that this is one nation that knows how to shop. World-famous Orchard Road is the must-visit place to indulge in what is often joked to be Singapore’s national sport.

Whether browsing for electronics, clothing, luxury brands, high street fashion, interior pieces or even a few ideas for some jaunty souvenirs, it’s almost guaranteed that visitors will be able to find what they’re looking for in one of the vast shopping malls dotted along the road.

The popular Joo Chiat Road has a bit more local flavour. The site of the old Changi market (now the Joo Chiat Complex), this has long been one of the shopping hotspots in the city and continues to be so through the government programme of protection and restoration of the old pre-war shops and buildings. As a result, the elaborate building facades are among some of the best preserved colonial constructions in the city.

As another one of Singapore’s entertainment districts, the area around Joo Chiat is a lot of fun – however visitors should beware that it’s one of the city’s late-night unofficial red light districts, so proceed with caution throughout the later hours.

Dark side of the bay
Shopping in Singapore doesn’t have to mean monster malls with arctic air conditioning and stuffy salespeople as many locals and tourists seem to prefer. The reformed area of Bugis Street is a much more enjoyable and diverse experience. The area was epitomised in Leonard Cohen’s song ‘Boogie Street’ as it used to be famous for nightwalkers and transvestites. Now it’s more noticeable for boutiques such as Icon@Bugis, which sell bang-on-fashion clothes for the young and trendy.

Irrespective of any unimaginative excuses such as ‘I’m too old,’ every person should take at least one trip to Singapore Zoo, which is justifiably billed as one of the world’s most spectacular zoos. There are more than 3,600 animals from over 160 species, including baboons, tigers, white rhinos, tigers, elephants and various species of monkey.

The enclosures are created to resemble the animals’ natural habitats as closely as possible, with waterfalls, rock formations, trees and streams dotted around them, and offer visitors the next best thing to seeing the animals in the wild.

Even more unusual is the Night Safari, which takes place next door. As many animals are naturally nocturnal, seeing them in the daytime will only offer a certain degree of verisimilitude. The Night Safari, by contrast, is an unmissable opportunity to see the animals at their liveliest, and runs every day from 7pm to midnight.

Esplanade – Theatres on the Bay showcases the modern fusion of various cultural heritages through its interesting programme of concerts, plays and performances. The iconic buildings have been likened to the eyes of a fly, but its most popular association is with the Singaporean fruit the durian, due to its spiky exterior. Even if you don’t manage to buy tickets for an event (some of the more popular ones sell out weeks in advance), it’s worth taking a stroll to the buildings to see them at night, perched on the delta of the Singapore River.

Singapore is blessed with great year-round weather with temperatures constantly hovering between 20ºC and 30ºC. Although it can get uncomfortably humid at times, there generally is no good reason not to explore the beautiful outdoors areas.

The Chinese and Japanese Gardens are one of Singapore’s most underrated sights – the verdant parklands are laid out in ancient northern Chinese and Japanese styles and dotted with picturesque lakes and rivers that are crossed via quaint bridges. The parks were built in the 70s to stop the Jurong district from becoming completely industrialised.

Head to the seven-storey Ru Yun Ta pagoda, the highest point within the gardens, for an unmissable birds eye view and don’t miss the Bonsai Garden, with its collection of over 2,000 bonsai trees.

Conversely, while there are endless high-market restaurants offering well-presented, tasty versions of these dishes, the best places to try them are often the local hawker centres, which combine excellent value for money with an inimitable authenticity of experience. Lau Pau Sat Hawker Centre is the pick of the bunch, and well located not far from the central business district and Raffles Hotel. Dinner is served until the late hours.

Another pick for Peranakan cuisine comes in the form of Blue Ginger on Tanjong Pagar Road. While it’s undoubtedly pricier than the hawker centres, Blue Ginger serves high quality food in a comfortable setting. Using nothing but the freshest ingredients, the chefs create dishes such as ayam buah keluak: braised chicken with turmeric, galangal and lemongrass.

Like many expat hubs, Singapore certainly knows how to have a good time. Downtime can be spent sampling the cocktails of the high-end bars: start with a Singapore Sling in the renowned Long Bar at Raffles, or get the impressively knowledgeable mixologists to create your favourite tipple or two.

In recent years, Clarke Quay has emerged as an after-dark entertainment hotspot. The Quay spans the area between Coleman Bridge and Clemenceau Bridge. An area that was once full of dilapidated and increasingly empty warehouses has been transformed into the destination for live music bars, salsa clubs, wine bars, jazz clubs, cocktail joints, pubs, and a vast nightclub for the more energetic. You name it, it’s there, as well as a mouth-wateringly tempting array of Moroccan, Indian, Chinese, Thai and Italian restaurants, to name a few.

Places to stay within the city are plentiful, but on the top-end scale, it’s easy to fall into the jaws of the international-branded mega hotel monoliths that dominate this end of the market.

The antidote comes in the form of the Scarlet Boutique Hotel, an individual and cosmopolitan venture in Chinatown. Put business on the backburner and luxuriate in the well-designed spaces of the rooms or the restaurants and bars aptly named Desire, Bold and Breeze. There’s even an outdoor Jacuzzi to consolidate that naughty mini-break feel.

Singapore has evolved over the last few years into the kind of destination that anyone can have a good time in, whether there for business or leisure. No two visits are the same: its beauty lies in its constant evolution and capacity for constant discovery. You just have to know where to look.