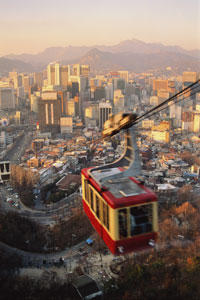 South Korea is fast becoming one of Asia’s up-and-coming destinations – it’s got the culture, nightlife, entertainment and history. But this fascinating country isn’t only about strides of modernity; there’s a completely different end of the spectrum to be found in Gyeongju, Korea’s museum without walls.

Seoul is one of the most impressive transformation tales of the latter half of the 20th century. Left as decimated rubble at the end of the Korean War in the 50s, it’s been on an upward trend ever since. The 60s and 70s saw the fulfillment of an ambitious building programme and an economic restructuring that saw the rise of the country’s per capita income catapult from $89 in 1961 to over $10,000 by 2000.

By the start of the 21st century it was a city that had completely regenerated and the world has watched this once failing city host international events including the 1988 Olympics and the 2002 FIFA World Cup. Now the country has one of Asia’s most powerful economies, and its capital is home to multi-national companies such as Samsung, LG and Hyundai. Despite a few glitches along the way, it still stands with Australasia’s fifth highest GDP – coming in just behind Australia – and has the 15th largest economy in the world.

But the transformation has not stopped there. Seoul has been quick to recognise and take action on the growing environmental concerns posed by a polluted and populated city. The first step in this process was the Cheonggyeocheon stream, which was completed in 2005. Covering a distance of 6km the project cost over $900m, and created a new ecosystem underneath the city.

Last year they turned their attention to the Han River Parks, which split the city into two parts. The project is part of the country’s four-river restoration project aimed at reviving some of the ecosystems that were partially destroyed during the years of economic growth and is a key part in the ‘Green New Deal’ policies that form the foundation of Korea’s ecological future and green growth.

Sleepless in Seoul
At first sight, Seoul’s manic streets and fun-loving culture might seem like a Hunter S. Thompson book, but it’s an easy city to acclimatise to. The people are friendly, getting around is simple (the taxis are cheap, and the metro system is extremely fast and signed in English) and the cost of living is surprisingly low, with clothes and excellent – if occasionally wildly spicy – food readily available at much lower prices than equivalent cities in Europe and America.

If Singapore is the city that likes to shop, Seoul can’t be far behind. There is shopping to be done at almost any time of the day or night. Shops and department stores generally stay open until 8pm, while market traders stay open as late as midnight and beyond. If that’s not enough, head over to the Dongdaemum area of town where the city’s night shopping malls have flourished, flanked by night markets where you can shop until dawn.

Purchases come in almost every form imaginable: fabrics, knockoff designer clothes, shoes, accessories – you name it, they have it. Malls including Cerestar, Migliore, Designer’s Club and Doosan Tower attract the city’s party crowd with frequent music and club nights as well as fashion shows and festivities.

Dining-wise, Korea House offers a unique chance to experience traditional cuisine and entertainment in a building of the time-honoured Josean architectural style; if you’re lucky you might even catch a traditional Korean wedding ceremony. Folk performances such as the fan dance and opera-styled singing take place in one of the several building houses.

As with most Asian cities, food is plentiful and easy to find in Seoul – street stalls abound, wafting smells of tasty pick-me-ups like chargrilled pork bites and fishcakes in seafood broth. A few rungs up the price ladder, the city’s branch of celebrity-magnet Mr Chow (91-6 Nonhyun-Dong, Kangnam-Ku; +82 2 517 2100) is a good spot for elegant Chinese cuisine amid sculptures, paintings and mood lighting along with the city’s young and beautiful.

It would be a crime to be in Seoul and not dip your chopsticks into some of the local fare, and there are few better places to do this than Hanmiri, a bastion of old-fashioned classiness and food that is fit for a king. It’s been named as Seoul’s best restaurant, so get there early to grab a seat (Human Starville, 2nd fl, Nonhyeonro, Gangnam-gu; +82 2 569 7165; www.hanmiri.co.kr).

As much about the glitz and glamour as it is about the actual food, Cine de Chef takes the questionable concept of merging cinema with gastronomy and transforms it into a unique dining experience. French and Italian cuisine is whipped out by the talented chefs and served in the comfort of your chosen screen, complete with surround sound and leather sofas (603-2 Sinsa-Dong, Gangnam-gu; www.cinedechef.co.kr).

You can’t be in this part of Asia without partaking in a karaoke session – as much a part of business transactions as the conference table, the importance of this informal mingling in South Korean business culture shouldn’t be underestimated, particularly in Seoul where karaoke bars are almost as plentiful as street food stalls. The city’s entertainment districts such as Gangnam to the south of the Han River are the obvious destinations for partaking, but it’s impossible not to find a karaoke bar in most parts of the city.

Cultural attractions
Fun as Seoul is, there’s more to do than just shopping and sampling the delicious local cuisine; there’s a wide choice of museums for those looking for their slice of culture. The Leeum, Samsung Museum of Art is arguably the one must-see for those on a tight schedule. It was created in 2004 by Samsung’s founder with the intention of preserving, encouraging and showcasing South Korean art and heritage.

The buildings alone are impressive enough, with Jean Nouvel, Rem Koolhaas and Mario Botto adding signature touches to their respective sections. The traditional collections create a snapshot of Korean culture throughout the ages from the prehistoric era to the end of the Joseon Dynasty in 1910. The post 1910 modern collection charts the amalgamation of the traditional forms with modern Western and Korean influences and includes works by Korean art maestros Lee Sang-Beom and Byun Kwan-sik.

Five former royal palaces are dotted around the city. Of these, Changyeongung (1 Waryong Dong, Jongno-gu) is particularly noteworthy for its Joseon dynasty architecture, complete with peaceful gardens and picturesque water features surrounding the buildings. Advance bookings are necessary as visitor numbers are highly restricted.

Easy as it is to forget, the Demilitarised Zone to the north of Seoul is a reminder of the war that shaped this country’s future and the continuing influence it has on this relatively small peninsula. Roughly 155 miles long, the DMZ is an interesting day trip destination where visitors have the opportunity to briefly step foot on North Korean land.
Bedding down
Business travellers are presented with a plethora of options when it comes to turning in for the night but the Grand Hyatt Seoul and W Seoul stand out among the crowd of five-star properties. The Grand Hyatt (747-7 Hannam 2-Dong, Yongsan-Ku; +82 2 797 1234) sits in 18 acres of landscaped gardens in the Yongsan district on Mount Namsan. Dining options come in the form of three restaurant and bar areas and the spa is one of the best in the city. The 252-roomed W Seoul (175 Achaseong-Gil, Gwangjin-Gu; +82 2 465 2222) is the prime choice for those wanting a room with a view – perched on the top of Mount Acha overlooking the Han River, it is still just 15 minutes from the city’s central business district. Rooms are decorated with signature W simplicity, with splashes of colour and enticingly comfortable beds.

Although it is only a four-hour drive away, the coastal city of Gyeongju is a world away from the ever-fuelled pace of Seoul. The city, nicknamed the ‘museum without walls’ was inscribed as a Unesco site in 2000. If Seoul is a place where the country’s future is almost a tangible entity, Gyeongju is a celebration of its past. The city’s importance dates from its days as the capital of the ancient Silla kingdom that ruled the peninsula from BC57 to AD935.

First stop on the itinerary should be the Geumgwanchong Tomb. One of the three sites forming the triumvirate of the Noseo-dong Tomb District, it’s perhaps the most interesting because the specific origins of the tomb are as yet unknown. The tomb was discovered in 1921 and was named after the first relic that was found within it, a gold crown or ‘Geumgwan.’ The crown, along with the other ornaments found in the tomb, can be found in the Gyeongju National Museum.

Famed for the Cheonmachong and Hwangnamdaechong tombs, the Daereungwon Tomb Complex (Inwang-dong, Gyeongju-si; +82 541330) contains 23 tombs. Cheonmachong’s painting of a mounted horse is the only known surviving painting from the Silla era, and the tomb contains over 11,500 remains and relics of the king as an example of the lavish lifestyle lived by the rulers of the time. Hwangnamdaechong is the largest ancient tomb that has been discovered in Korea and contains over 30,000 relics and accessories for the king and queen buried inside.

Pass by Asia’s oldest surviving astronomical observatory at Cheomseongdae (Guhwang-dong, Gyeongju-si; +82 54 742 9922). Dating from around 632-640, it was used to observe the stars and forecast the weather, along with the equinoxes and solstices that were also determined by the observation of the stars.

For those that have a bit more time, further Silla dynasty monuments can be found in the forms of granite temples (Seokguram), the remains of the royal villa at Poseokjeongji and the Underwater Tomb of King Munmu. If time is of the essence, the Gyeongju National Museum is not to be missed. The museum has existed for almost a century and has collated an impressive collection of local and national artefacts throughout this period.

The exhibition is divided into four main parts, each of which illuminates different items and time periods for a vast overview of the ancient kingdom. Wandering through the Buddhist sculptures and relics excavated from the city’s numerous tombs is the majority of the appeal here but a special eye should also be kept open for King Seongdeok’s Bell, the most renowned Buddhist temple bell in Asia (Bae-dong 454-3, Gyeongju-si; +82 54 745 8484; www.eguide.gj.go.kr).

Tacky and uninteresting as a self-designated ‘tourist park’ might sound, travellers might want to think twice before they dismiss the Bomun Tourist Town out of hand. With the Bomunho lake at its centre, the lake resort is an entertaining way to spend a day when the museums and temples begin to take their toll.

The 1970s construction is beginning to look a little dated but the resort is home to a golf resort, shopping mall, Seonjae Art Gallery, outdoor performance hall, drive in cinema, tourist hotel and conference facilities. Visitors between April and January should also try and see one of the free Gugak (traditional Korean music) performances held in the performance hall.

Sleeping options are more limited than in Seoul, but the Hilton Gyeongju (370 Shinpyung-dong, Gyeongju; +82 547 457 788) is a beautiful Art Deco hotel surrounded by the countryside and national parks near Lake Bomun.

Touch down
It’s no coincidence that South Korea’s popularity has gone hand in hand with the growth of Seoul’s Incheon Airport. The airport has been voted the best in the world several years in a row due to its top class facilities, fast turnaround times and proximity to many of Asia’s other business hubs such as Beijing and Tokyo. It’s the hub airport for the fast-expanding Korean Air and one of the largest airports in the world with over 15 million passengers passing through yearly. It’s the perfect chance to maximise the potential layover to discover both Seoul and Gyeongju – just one more reason to extend your stay.