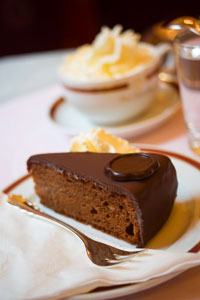 My last experience of Vienna International Airport had culminated in a ride in the back of a black police van with an armed escort and subsequent frisking by Airport Security. Apparently even the Americans learn security skills from their uber-efficient Teutonic cousins. Friendly greetings on arrival were soon replaced by a clinical auf wiedersehen. Standing cruciform, my case in front of me, I was asked to open it with the kind of hesitancy that expressed the nervous anticipation on everyone’s mind.

A luggage X-Ray machine had picked up something worrying, its form powerful enough to ring alarm bells. An Austrian Art glass wrapped in socks and shirts, lovingly cocooned amongst the innards of my Samsonite Cubelite. Realising that the lead content of an Austrian glass candle holder had almost caused an international incident, I hastened to joke that “at least they hadn’t put the rubber gloves on”. “Believe me” replied the head honcho, “If you had experienced her less than delicate hands, you’d never want a sexual relationship again”.

Moments later, I found myself in the back of the same police van, as it whisked me back to the departure lounge to filter me back amongst my fellow passengers.

I love Vienna! It bubbles with a mixture of Austrian correctness, Imperial Splendour, the last gasp of an emotional dust that still exudes relief for the passing of war time horrors and Stalinist oppression, washed down with plenty of Mozart and oodles of cake. I make a pilgrimage to Demels every time I visit Vienna, checking the pastry chef’s latest creation as my taste buds greedily embrace the recipes of 200 years past.

Having an elegancy of sufficiency, walk off your indulgence with a trip to the Schatzkammer Treasure house nearby; this as much exceeds ones expectations of a museum as Demels does a service station coffee shop. If Indiana Jones opened a museum, this would be his blue print. Exhibits include the Spear of Destiny, lance of the Roman Cavalry officer which allegedly pierced the side of Christ. Even reserving judgement, the Emperor Charlemagne, The Hapsburgs and in its darkest days, Adolf Hitler all sought the lance as a » talisman of power. A few display cases away you’ll find the Golden Fleece and Charlemagne’s crown. You begin to wonder if this is a museum or a lost property office of history’s footnotes.

A short tram ride away, the Prata, most famously the back drop to the Third Man and James Bond film The Living Daylights rises above the city like an H G Wells alien. Climb aboard the antique garden sheds that hang from this huge Ferris wheel like Christmas decorations and treat yourself to the most wonderful view of the Vienna skyline.

Maybe Christmas is a time for Vienna to come into its own, as Christmas Markets appear and the scent of mulled wine vapours its way around the Rat Hause and beyond. It’s probably best not to indulge the more cringe worthy aspects of your sense of humour; as you buy a bag of chips and mulled wine from the local fritter meister who says it’s “ok he speaks English” when your German GCSE (ungraded) fails to impress. Don’t go all Lock Stock Mockney on them and ask for Vimto either, resist the temptation to shout Oi Oi Savaloy! This isn’t Wembley High Road on FA Cup day, this is Vienna and Vienna doesn’t suffer fools gladly.

When visiting somewhere so steeped in history I simply can’t bring myself to retire to a post-modernist crappola hotel at the end of my day with finger nail snagging bed spreads and lavatory pans that hang from the walls; Vienna screams old school and maybe the ‘Prince’ in me adores it just because that’s what it does best.

Where else can your shoes kiss the cobbles once trodden by Mozart, Mesmer, Jung, Gustav Klimt and Freud? Maybe Vienna analyses itself too much? If it does, it’s just its way and that’s part of the reason I love it. Like most capital cities, Vienna embraces the present and plans for the future, yet it still has an ability to amuse, enthuse and hold my attention in a way few northern cities manage, save maybe St Petersburg, Prague, Stockholm and parts of London. The best museums, the best cakes and if its shed more than a few tears for reasons a lad that grew up in Stanmore is only too aware of, it’s held itself together in a way that often sets it centre stage in an ever-changing world.

To understand the future, I look to the past and enjoy the present. Whether a romantic weekend away, full of carriage rides and sightseeing, a shopping trip for antiques and a cake-fest or as a family with parks and museums filling rainy afternoons or a cool respite from summer heat, or the grabbed moments of a full-on business trip allowing an hour’s solace, Vienna ticks the boxes and gets an ‘A’.

Andrew Blackall is an independent traveller, writer, broadcaster and director of factual and historical documentaries. He owns and runs The Lodge Avebury, a Vegetarian B&B inside a 5,500 year old Stone Circle.