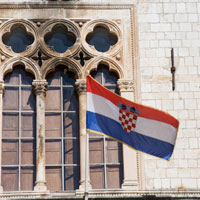 Croatia’s warm Mediterranean climate and 18,000km coastline has made it one of the top twenty tourist destinations in the world. Inland, it maintains something of a schizophrenic identity – Roman, Ottoman, Venetian and Soviet influences beneath a newly cosmopolitan feel have made it one of the trendiest countries of the 21st century.

Few cities are as buoyant or uplifting as Zagreb, despite its stern Austro-Hungarian architecture; the people rarely stay indoors and even in winter the parks are full of Croats, young and old. The ‘pearl of the Adriatic’ Dubrovnik, with its Baroque arcades, marble streets and beautiful beaches, is a UNESCO World Heritage site in it’s own right, as are Split and Trogir. The Dinaric mountains which run parallel to the coast are excellent for hiking and getting away from the crowds.

Despite it’s hip status, many Croats are pessimistic about the nation’s economic future. The transition from communism to liberalised economy was interrupted by war during the breakup of the old Yugoslavia. Today, state investment still accounts for 40 percent of GDP, public money is tied up in loss-making industries and the judicial system is backed up with cases of land dispute and corruption.

Building a business relationship can take time. Meetings tend to run on and schedules are rather flexible; use the time to get know your hosts and early formality will quickly subside. Above all, beware of the bureaucracy – an overloaded civil service and rigid employment laws can make it difficult to get the ball rolling.

There are major international airports at Zagreb, Split, Dubrovnik, Pula, Rijeka and Zadar. Connections by sea are available from Italy and Slovenia. The European train and bus network has overland connections to most countries in Europe.

Buses are the major form of public transport and are usually faster than trains. The train network is less extensive but is usually more comfortable and around 15 percent cheaper than equivalent bus routes. Croatian roads are fairly good, though tolls are incurred on motorways.

Business etiquette: Greet with a firm handshake, eye contact and smile. Meeting schedules are flexible but be punctual for the start. Be careful with words to begin with; as a relationship develops you can usually be more direct.

Tipping: 10-15 percent unless service is included.

Safety: Don’t accept food and drink from strangers as it may contain drugs.

Laws: Carry identification at all times. Seek legal advice before purchasing property as there have been disputes over the validity of some legal titles.

Healthcare: Vaccinations required for diphtheria, hepatitis A and tetanus. Reciprocal health agreement exists with UK, free emergency healthcare provided. Other healthcare must be paid for. Health insurance is advisable.