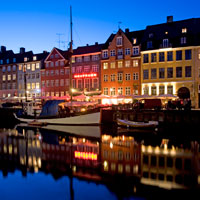 There’s been a silent revolution in Copenhagen over the last few decades. Long seen as a peaceful, pleasant city, since the 1990s it has increasingly begun to express itself as one of Europe’s leading cultural centres.

Until recently its citizens would eat out only on special occasions, but they can now dine in some of the best restaurants in the world; indeed, Noma has replaced El Bulli as the world’s number one on the 2010 San Pellegrino list. There’s also a brand new opera house and a host of other great venues, including the popular and picturesque open air Tivoli, helping the city to attract an increasing portion of the world’s top stars across classical and contemporary genres.

The Danes are certainly enjoying the urban renaissance and Copenhagen consistently tops liveability polls as Europe’s best city. There’s a thriving art scene, a booming local economy and some of the best nightlife you’re ever likely to experience.

Where to stay
The Nimb and AXEL hotels are both excellent choices with reputations for great services to go with four-star facilities. If you’re arriving late or have to get away early then the Hilton Copenhagen is a great choice close to the airport.

Where to eat
The remarkable Noma has gained international recognition recently. Formel B houses two top chefs and is another great venue serving only the freshest of fine foods. Geranium is a former Danish restaurant of the year that has some delightful seafood on an international menu.

What to see
Tivoli is a cross between botanical garden and pleasure park and particularly comes alive when there’s music playing in the open air arena. The old Citadel is an architectural splendour, while both the National Museum and the Museum of Danish Resistances have some fascinating exhibitions.