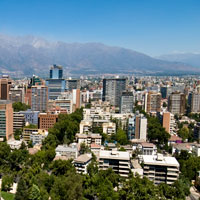 Nestled between the Andes and the Pacific, with over 6,000km of coastline riddled with fjords, inlets and islands, Chile is blessed with an unusual geography that encompasses desert, forest, vast glacier and rolling grassland. It is also a South American success story – it has, among other things, the highest level of development, economic freedom and quality of life on the continent. After emerging from the dictatorship of General Pinochet in 1990, it also has a high level of political stability.

Business requires patience, however, as Chileans are rarely in a hurry. That hardly matters though; enjoy the all-night parties and Sunday barbecues, world-class cuisine and sweet terremoto. Lurking beneath the smog of Santiago is a pulsing city every bit as cultured in its way as Buenos Aires.

When you’re bored of the capital head out into the mountains and catch some exhilarating ski action at El Colorado, or just trek through the snow-dusted peaks and into the back of beyond. Or head up the coast to the bohemian Valparaiso, with its vertiginous vistas and mindboggling labyrinth of streets, possessed of both a kicking nightlife and UNESCO world heritage status. Then head out into the country and tour the Chilean vineyards that are taking the world by storm.

From San Pedro de Atacama in the north to Tierra del Fuego in the south, Chile’s stunning landscapes offer an almost endless array of delights on offer.

Intercontinental flights go to Santiago, but regional airports have routes to many other South American countries. There are numerous border crossings into Argentina, though only a few with public transport, and also bus connections to Peru and Bolivia.

The rail system is rather neglected, except around Santiago. Long distance buses are comfortable, punctual and air conditioned. There are several domestic airports and given the distances involved flying can be a sensible choice.

Business etiquette: Greet with a firm handshake. Chileans are formal in business dealings, though they tend to stand close when conversing away from the table. Business culture is relationship-driven and initial meetings are to establish trust. Communication style is empathic and non-confrontational; avoid direct confrontation.

Duty free: Items bought duty-free to the value of US$500; 400 cigarettes and 500g of tobacco and 50 cigars; 2.5l of alcohol (only for visitors over 18 years of age); A reasonable quantity of perfume for personal use.

Safety: Chile is an active tectonic zone and violent earthquakes are possible.

Laws: Penalties for even minor drug offences are severe.