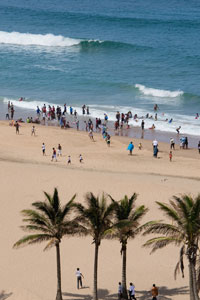 Few cities can boast such stunning surrounds as Cape Town, or such an iconic natural monument as Table Mountain at their heart. More than just a pleasing wallpaper for the horizon, the spectacular scenery is something of an adventure playground for the city’s residents and add spice to what is already a beautiful and fascinating place to be.

The architecture has been inspired by a chaotic conglomerate of Victorian, Dutch and African motifs, and despite a cavalier disregard for principle of planning a genuine master-work has emerged. The numerous galleries and craft shops are a testament to the creative potential of the citizens; the proliferation of high quality restaurants and pulsating night-life equally show the city’s spirit. But there’s an energy in Cape Town that cannot be qualified, perhaps the sum of its sublime surrounds and combustible cultural heritage. Here, at least, South Africa truly is ‘the Rainbow Nation’.

Where to stay
Cape Town is overrun with great places to stay; An African Villa is a top selection as the helpful staff will share in-depth knowledge of the city and add significant value to an already great hotel; The Blackheath has similarly exceptional service and adds an almost paradisical setting.

Where to eat
Fans of fine food should head to La Calombe, rated in the world’s top fifty restaurants in 2010. The all female team at Mosaic has produced an experimental menu that dazzles from aperitif to after-dinner mint.

What to see
Table Mountain is Cape Town’s most iconic landmark; climb to the top for stunning panoramic views of the surrounding city. Cape Peninsula sees miles of sandy beaches taper into the famous Cape of Good Hope. The Victoria & Albert Waterfront is the prime entertainment district that rivals London’s Soho for its lively and eclectic ambience.