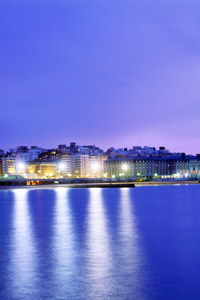 The most European of South America’s cities, the ‘Southern City of Light’ has taken a bit of a beating in recent years. When the economy of Argentina collapsed in the late 90s, the government was forced to remove the peso peg to the dollar and the currency’s value came crashing down.

Buenos Aires took the brunt of the damage, yet while that wasn’t good for the man of the street it was great for the foreign visitor or investor. The city is as glamorous as ever but now, quiet aside from the tumbling cost, the porteños are making every effort to roll out the red carpet to anybody who wants to know.

So imagine a city with the sophistication of Paris, the pulsing energy of New York, a great big streak of Latin pride and passion and a favourable climate that straddles the temperate and tropical, where everybody is just desperate to open the door and show you in; then you’ll come close to this marvellously intoxicating city.

Where to stay
The Howard Johnson Boutique is a stunning hotel in the stunning neighbourhood of Recoleta. PuroBaires in Palermo Soho has a light and tranquil feel in another great area of the city.

Where to eat
La Cabrera is widely renowned as one of the best parillas in the city; nearby Des Nivel is an equally popular choice for locals. Both serve some of the best steak you are ever likely to taste, but make reservations as queues get lengthy early in the evening.

What to see
There are plenty of opportunities to take in a tango show. The stunning neighbourhood of San Telmo is full of character and colour, while a river cruise round the captivating Tigre delta is like visiting another world; the sunsets in particular are superb.