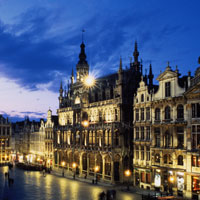 The Walloon-Flemish cultural fault-line that runs through Belgium is nowhere more evident than in Brussels, where even the central university was split into French and Dutch speaking halves when the Walloon community gained legislative power.

It’s ironic that a city so given to internal division should be seen as a symbol of European Unity; yet the EU parliament resides here and the international community it has attracted has created the ultimate in cosmopolitan cities.

This has long been a centre for the arts, cultivating the Art Nouveau architecture of Victor Horta and the surrealism of René Magritte; now, its can claim a thriving café culture and a selection of diverse local neighbourhoods, each with their own unique character and experiences. There are over eighty museums and art galleries, so whether its music, sculpture, history, science or religion, there’s something here to catch your eye.

Where to stay
The Radisson Blu EU is conveniently located and has free, fast wifi among a range of other facilities; the downside if you’re driving is the expense of parking. That’s less a problem at the five-star Sofitel, which is on the Expedia Insider’s list for excellence in 2010.

Where to eat
Comme Chez Soi is famous for its fine French cuisine; however, if you prefer not to book two months in advance, try La Claf des Champs, a popular venue with a great outdoor terrace in the heart of the city. Nearby Amadeo Steakhouse is another top choice, well suited for business entertainment.

What to see
The Grand Palace is a one of the most beautiful medieval squares in Europe and is an example of Brussels at its finest. The Musical Instruments Museum has a fascinating collection that really brings its subject to life. Musee Rene Magritte showcases surrealist art at its finest.