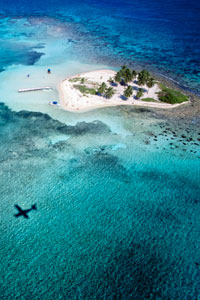 A small country with a hot, Caribbean climate, Belize is one of the greatest biodiversity hotspots on the planet. With its western borders consumed by the central American jungle and its eastern shore lined by the second longest coral reef in the world, the range of opportunities for divers and wildlife enthusiasts alike is almost endless. With those riches come gorgeous beach resorts with clear blue oceans perfect for sailing, snorkelling and windsurfing, myriad rivers with excellent rafting opportunities and great inland reserves begging to be explored.

A former British colony, the country’s sympathies today lie with its Central American and Caribbean neighbours. The colourful Belize City is a vivid concoction of colonial grandeur and bohemian chaos, while tumbledown Dangriga proudly flaunts its Garifuna heritage. The Mayan legacy is still visible in a series of impressive temples around the country; the Caana pyramid at Caracol is still the highest man-made structure in the country.

Belize is one of the most sparsely populated countries in the Americas and its economy is primarily based on agriculture and agro-industry. While in essence it is a market economy there has been little investment in infrastructure and this paucity remains a barrier to open business. Yet the population is growing at a staggering 2.1 percent a year and with new stimulation from tourism and construction it could just be one of the hottest developing markets of the near future.

International flights go to Belize City. Avoid arriving by cruise ship as this damages the coral reef. Land crossings are possible at two points to Mexico and one into Guatamala.

Business etiquette: Dress in lightweight suits for initial meeting. The business culture is largely risk-averse and a trust relationship is important. Inquiring about family and children is a good way of building a relationship. Belize is an eco-friendly nation and propositions with potential for environmental damage may be frowned upon.

Safety: Solitary travellers may be victims of harassment.

Healthcare: Vaccinations required for hepatitis A, hepatitis B, malaria, tetanus, typhoid and tuberculosis. Medical facilities are limited; health centres exist in the major urban areas and mobile clinics in more remote ones. Health insurance is strongly advised; payment in cash is often expected regardless.