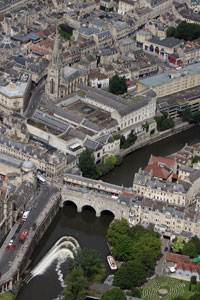 The first view of Bath from the top of the emerald valley in which it sits is one that lives long in the memory; perfectly preserved, it looks almost like a museum model of a sixteenth century settlement. There’s been a city here since AD 43 and the ornate stone architecture amid the leafy green surrounding hills could almost convince you that little has changed since.

Walking beside the river in summer is a particular joy and you can still explore the Roman Baths or the old Bath Abbey. Yet some of Bath’s best features are its humble yet plentiful old-school alehouses; there are centuries of memorabilia on the walls of many of these cosy taverns, while the beers themselves aren’t bad either. The city’s entire population could fit snugly into a suburb of London and the friendly small town atmosphere is part of the charm; on lazy Sunday afternoons it can feel like time has stopped and you’ll probably wish it could.

Where to stay
The Apsley House Hotel is a quintessentially English B&B in a country manor that is nevertheless convenient for the city centre. The Bath Priory also has plenty of character and comes complete with an excellent in-house restaurant.

Where to eat
The best restaurants tend to be by the river; Bath is small enough that you can find them all by foot. Same Same But Different has a varied menu with excellent food, though can get very busy. Enzo is a popular Italian and Yak Yeti Yak is recommended for its Nepalese dishes.

What to see
The Roman Baths and nearby Stonehenge are the most popular local landmarks. Alternatively, try the Bizarre Bath tour for an alternative and humorous take on this stunning city.