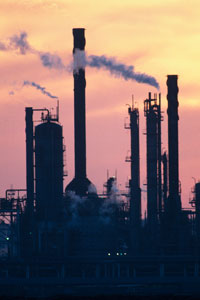 The freshwater springs that extend beneath the Persian Gulf have attracted settlers to Bahrain for four thousand years – not just for the drinking water, but for the pearls that they encouraged. Today the economy is based not so much on an international pearl trade but on rich oil deposits and a booming banking sector. In 2008 it was named the fastest growing financial centre in the world.

It is also one of the most liberal countries in the Arab region and the people greet you with such warmth that you might feel you are a long lost brother. The social side of business is extremely important and it’s considered bad manners to rush things, so there’s often little you can do but sit back and enjoy the hospitality.

With a hot climate and some stunning beaches there are few better places to do so, too. Walk the battlements of 16h century Qala’at al-Bahrain or take a more modern tour of the county’s 21st century Formula One grand prix track. There’s a large wildlife reserve full of exotic desert species and a fascinating national museum. Some of the modern engineering projects are a site to behold – the new islands to the south and the financial harbour at Manama have both been reclaimed from the ocean.

Bahrain International Airport is 12km from Manama and handles many intercontinental flights. There is a single border crossing to Saudi Arabia on the King Fahd Causeway and a fortnightly ferry to Iran.

Local buses link the main towns and are fairly frequent. Driving is the only other option and is relatively straightforward; some roads are off limits and speed restrictions are rigidly enforced.

Business etiquette: Greet by shaking hands and kissing on each cheek. Maintain eye contact and smile. Lightweight suits are worn for initial meeting. A letter of introduction helps; Bahrainis prefer to do business with those they know. Avoid high pressure tactics or trying to rush deals; this will harm your reputation and business relationship.

Tipping: 10-15 percent. Service charges added to the bill rarely go to the waiters.

Safety: There is little crime in Bahrain, though petty theft and pickpocketing occur in old market areas.

Laws: It is illegal to attempt to convert a Muslim to another religion.

Healthcare: Vaccinations required for Hepatitis A and tetanus. There is an excellent health care service and emergency treatment is provided free of charge. Pharmacies are well-stocked.