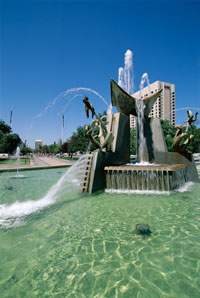 Named for the German consort of King William IV, Adelaide is a refreshingly open city of wide public boulevards and lush greenery. The open spaces appear to have cultivated a liberal, forward looking populace from the start; early Adelaide was notable for its political progressivism, being the first Australian city to outlaw sexual and racial discrimination, ban capital punishment and recognise Aboriginal land rights.

Today it is more famous for its fine dining and renowned arts festivals, from the annual Fringe that sees in the spring to festivals of ideas, cabaret, writing and guitars. The first Australian Grand Prix was held here in 1985 and some of the biggest events on the international sailing and cycling calendars are also held here; not to mention the local obsession with cricket and Aussie rules football. There’s something for everybody in this remarkably open city, one that promised utopia from the outset and hasn’t hit too far from the mark.

Where to stay
Majestic Roof Garden and Crown Plaza Hotel are both in excellent locations, with good facilities and reputations for first rate service. If you’re planning a longer stay and want access to self-catering opportunities as well as hotel comforts, Adabco is good choice, though slightly further out.

Where to eat
Hutt Street is where many of the best restaurants are clustered, including La Trattoria which won the World’s Best Pizza prize in 2005. The Central Market is a great place to go if you want minimum fuss and maximum choice. There’s also a Chinatown with a good range of oriental cuisine.

What to see
The South Australian Museum is particularly worthwhile for its prehistoric and natural history collections, as well as ancient Egyptian art. Adelaide Botanic Garden is a tranquil beauty or you can cuddle a koala at Cleland Conservation Park.