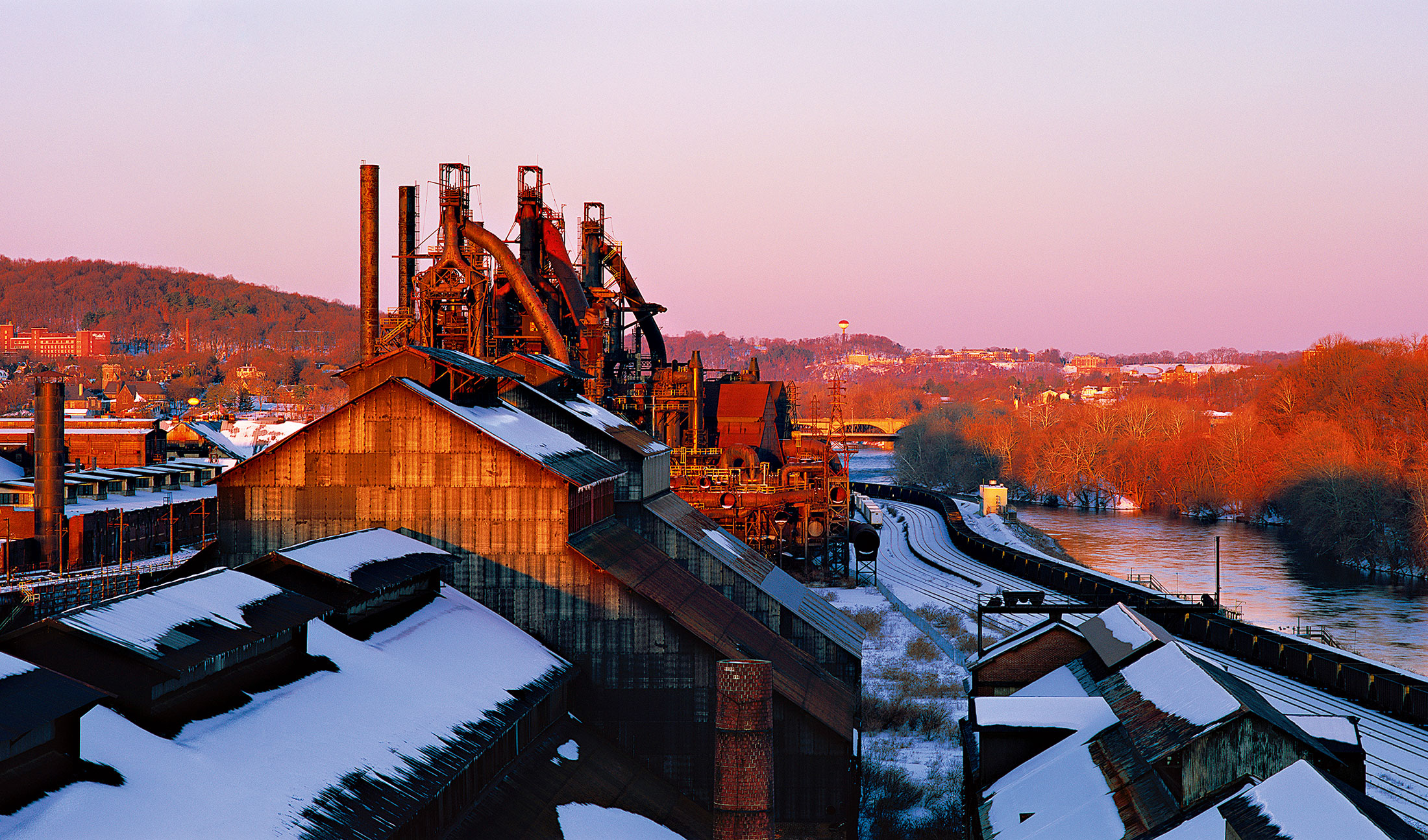 Artists have long looked to industrial landscapes for inspiration. While there is an obvious beauty in the shining facades of new factories, less-often examined is the value of industrial decay. In Jonathan Waldman’s new book, Rust: The Longest War, the author examines the destructive influence of rust and posits that the “great destroyer” might in fact be the most destructive natural disaster in the modern world. However, the contribution of the Bethlehem, Pennsylvania-born photographer Alyssha Eve Csük suggests that decay can bring certain images – those that are otherwise lifeless – to life once more.

Drawing on the famed Bethlehem steelworks site as her muse, Csük’s work brings to the fore bygone industrial settings, and asks that we re-examine our interpretation of decay as a destructive force. Business Destinations spoke to the photographer about her approach and the significance of the Bethlehem steelworks for her and the surrounding community.

Can you tell me a little about your involvement in Jonathan Waldman’s new book, Rust: The Longest War?
The book teaches a lot about rust, and perhaps you may appreciate, as I do, the characters who make a living combatting rust, for their diligence and tenacity coupled with their underlying calm and resilience – very much a parallel to how rust operates in and of itself.

My perception of rust is in contrast to all the other characters in the book: for them rust is a menace, causing many headaches and late nights. It is highly unlikely any of them would ever think of rust as being ‘beautiful’. Though, rust could quickly turn on me with the inherent risks that come with exploring bygone industry, and the one thing all the characters in the book – myself included – have in common is that it takes a force of character to make a living off of rust; whether it be to fight it or to seek it.

Secondly, entering a bygone site often feels analogous to what it might be like to enter a time capsule. Time is the quintessential character that always gets us deep at our core, and one that many creatives seek to arrest to one degree or another in their work. Being in these environments, I feel, affords the opportunity to get closer to time – at least, the ravages of time. My photographs of bygone industry pretty much embody the Japanese worldview of aesthetic, Wabi-Sabi – particularly the Sabi part, which means ‘the bloom of time’. It connotes the natural progression of an extinguished gloss that once sparkled. Sabi is beauty or serenity that comes with age, when the life of the object and its impermanence are evidenced in its patina and wear.

Lastly, another reason I am drawn to bygone industry, is that I am charmed by the industrial era – the design and form components, along with the history and, overall, a more simplistic way of life.

Where did this fascination for bygone industry begin?
My fascination with bygone industry actually began on a bike ride, on a warm November day, and the long afternoon shadows raking across the ruins caught my eye from a distance. I rode closer to the fence’s edge and stared into the abyss of the five remaining blast furnaces. In that moment I was drawn. I returned two days later with my camera and that was the beginning.

I read recently that you once fell through an unseen trough and were saved only by your camera bag.
Yes – there are many, many risks associated with my work. On that particular day, it was my camera bag and tripod that kept me from falling through the trough where the hot molten iron would flow, and onto the hot metal car below, from which I would have likely slid or possibly bounced off onto the ground below – approximately an 18ft drop. Though that was just the beginning of my coming face to face with the corrosive nature of rust.

Rusted floors, rusty objects and debris falling from above, vagrants, copper thieves, sharp protruding pieces of metal all around, weather conditions, and even wild animals – I have encountered all of these and more. Fortunately, I have always spotted vagrants and trespassers before they would see me, and if it did not seem safe to encounter them I would get out of the area without them knowing I was even there.

This is not something I pride myself on – it is something I am grateful for, as I have had numerous encounters with my life being at risk, and I’m fortunate to have survived them.

Can you tell me about the history of Bethlehem’s steelworks and what significance it has in the community?
The steelworks in Bethlehem blew its first furnace during the American Civil War. Then called the Bethlehem Iron Company, it was a manufacturer of wrought iron railroad rails, and in 1873 the company began making steel inside a building designed to look like an industrial cathedral.

To stay alive amidst tough competition, the company diversified into niche markets and later, in the early twentieth century – under the new name of Bethlehem Steel Corporation – grew spectacularly as orders for their recently introduced wide-flanged beam went into skyscrapers. Shells, artillery, and other defence orders kept the plant humming during World War I, and World War II resulted in the employment of approximately 30,000 people at this plant and many more at additional properties.

The steelworks in Bethlehem was the ‘home plant’ of the corporation. As such, when competitor plants of similar vintage and those in uneconomical inland locations were shuttered in the 1970s, Bethlehem endured. The end of hot metal operations finally came in 1995 when the last blast furnace was blown out.

However, Bethlehem Steel did not give up on the site. Instead, it initiated a historically minded redevelopment effort that has led to the preservation of the blast furnaces and several of the most historic buildings. A partnership with the Smithsonian Institution spurred the creation of the National Museum of Industrial History – now under construction within a 1913 building on the site. The museum will tell the story of Bethlehem Steel and industrial America using large-scale operating artefacts such as steam engines, machine tools, and a small iron-melting foundry.

The legacy of Bethlehem Steel is all around us. It survives in the bridges, buildings and infrastructure that form the backbone of America. It survives in the communities and families that formed around the company’s mines, mills, plants, and shipyards. The Bethlehem Plant of Bethlehem Steel is still a significant place for the community: many of the most historic features of the plant have survived and are the focal point of redevelopment efforts. Like a hulking battleship or a black, mammoth-like beast, the 23-story blast furnaces serve as a backdrop for an arts district known as Steel Stacks, and thousands of people regularly attend concerts and events at the base of the furnaces.

The ongoing construction of the Smithsonian Affiliated National Museum of Industrial History and a NYC High Line-style walkway along the furnaces promise to further enhance the plant’s status as a cultural centre. The plant today represents a respect for the past and an opportunity for the future. The spectacular architecture and engineering of the steelworks sparks the mind in ways that no greenfield site could. The site has become a source of pride – both of what it produced in the past, and in the way it has successfully become a destination in the present, drawing visitors from all over the world.

What do your plans for the near future look like?
Great question, since I have never been one for much of plans. Frankly, the last two years have been quite difficult, in great part due to my beautiful father, who became quite ill in the beginning of 2013 and passed away in the spring of 2014.

A year before my father’s illness precipitated, I embarked on a new project with trees – trees in relation to the landscape, which I call ‘treescapes’. Though the subject has been explored by many, I think my view is somewhat different and will amount to an interesting body of work.

If I were to pick three subjects I’d like to photograph in the future, I’d like to capture a launch pad site, crystal caves and the surfaces and landscapes of other planets. In the meantime, however, I have a number of other projects that I have been working on, and in May I will finish my second year teaching at ASU – which, through this difficult period in my life, I have enjoyed immensely. But now I feel it’s time for me to return to my personal work.