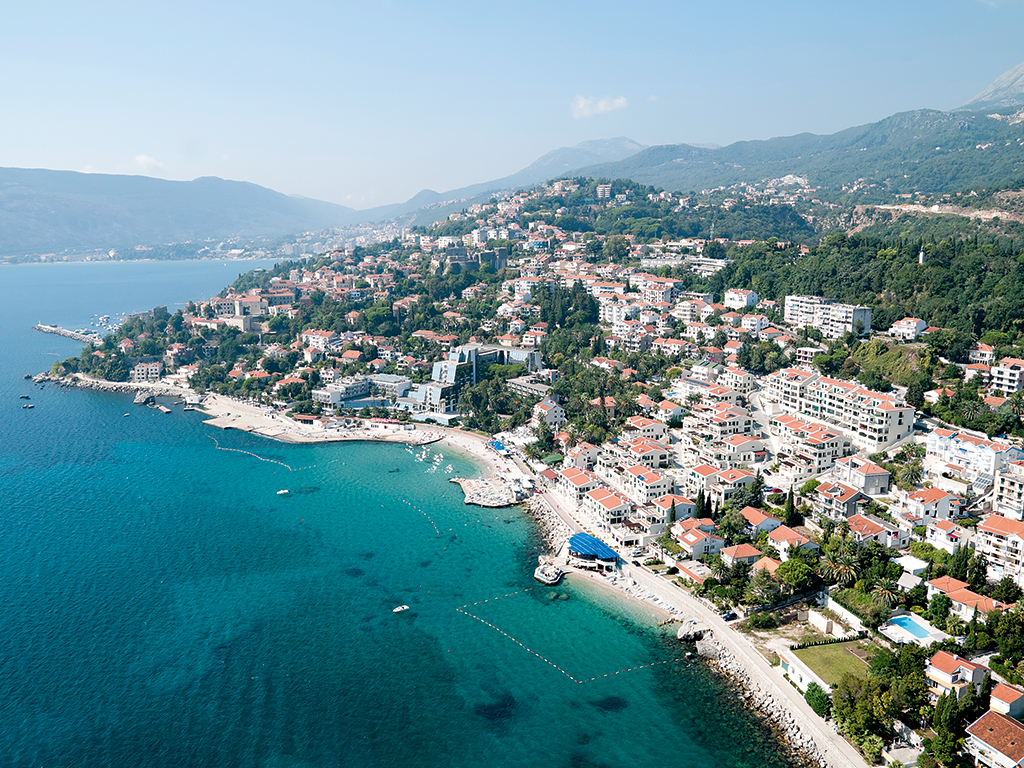 An aerial view of Herceg Novi, with historical medical town Igalo in the distance

Nestled snugly between Croatia and Albania, the ancient state of Montenegro has long gathered dust at Italy’s heel. Where Ottoman armies once clashed with theocratic warrior princes, local bureaucrats now take turns dodging responsibility for the nation’s sociopolitical setbacks. From the collapse of various federal governments to the shortsighted mismanagement of its metal industries, this land is constantly being torn down and rebuilt. But the coming decade promises the start of a new, more prosperous chapter in the country’s erratic history.

Since gaining independence from neighbouring Serbia in 2006, the southern European state has grown by leaps and bounds. Not only does Montenegro now boast the highest income per capita of any of the Adriatic states, but a new government focus on public welfare is seeing the rapid dissipation of poverty. That focus, however, is also leading to a high level of public debt. Yet while President Filip Vujanović and his social-democratic government attempt to eradicate that debt by freezing pensions and hiking individual tax rates, the economy is taking solace in the rise of new industries that promise to help its service-based economy reach a vital period of transition.

The old school
Since the late 1970s, the single biggest driver behind Montenegro’s boom-and-bust economy has been Kombinat Aluminijuma Podgorica (KAP) – the country’s bustling aluminium firm. Not only is KAP Montenegro’s biggest national employer, but it’s also responsible for over 50 percent of national exports. Every year, the company produces some 120,000 metric tonnes of aluminium. That equates to just under five percent of Montenegro’s entire economic output.

To safeguard that contribution, the state purchased a third of the firm in 2005 and is now its largest shareholder. Yet reactionary management and encroaching competition have transformed Montenegro’s former industrial powerhouse into a public burden. Despite an aggressive modernisation programme that costs the state $4m per month in subsidies, KAP is facing debts of around $469m. That equates to a tenth of Montenegro’s entire GDP. Consequently, IMF officials have gone so far as to recommend the firm’s complete closure. Yet because KAP maintains a corporate reputation as the country’s backbone, politicians fear the social implications of shutting down operations. Luckily, other firms are stepping in to pick up the slack.

Although government officials are keen to shift Montenegro’s economy away from an overreliance on services, one of the nation’s corporate success stories continues to be its semi-nationalised electricity provider. A joint venture between the Montenegrin Government and Italian giant A2A, Elektroprivreda Crne Gore (EPCG) is another of the state’s biggest employers. Thanks to a campaign of foreign-backed expansion to increase production capacity, EPCG was recently tipped by Deloitte as one of Southern Europe’s rising corporate stars. Shares have since skyrocketed by a fifth.

Because there are no regulatory distinctions made between domestic and foreign firms, international corporations enjoy full ownership of Montenegrin companies and repatriate profits or dividends without restriction. Consequently, Montenegro rakes in a cool $609m in FDI per annum – accounting for around 10 percent of its annual GDP. The country’s thriving building sector has been bolstered by an influx of foreign ownership in recent years, helping drive the Montenegrin economy’s new ringer industry: international tourism.

A new era
All the pieces are falling into place for Montenegro’s up-and-coming tourism industry. It’s easy to see why. Not only does the tiny country boast a summer climate identical to that of Majorca and the Cote d’Azur, but its 294km of beaches bask in over 240 days’ worth of sunshine each year. In the wintertime, families and world-class athletes flock to the towns of Durmitor and Bjelasica, which enjoy 12 weeks’ worth of fresh snow per year. In the spring and autumn, history buffs gather at the Bay of Kotor to wander through rambling Byzantine ruins, and cosmopolitan shoppers relish the thriving capital Podgorica.

People are finally starting to take notice. Last year, Lonely Planet named Montenegro one of its top 10 must-see destinations – and over one million people heeded the call. During the peak summer season, 35,000 tourists now land in the country each day. What’s more, the World Travel & Tourism Council reckons that number will only rise, with footfall predicted to increase by 16.4 percent over the next seven years. That makes Montenegro the fastest-growing tourist market in the world.

One of the industry’s biggest earners is medicine. Ever since the Middle Ages, cutting-edge physicians have flocked to the small Montenegrin town of Igalo to study the supposed healing properties of its naturally radioactive muds. Doctors at the Institute of Vichy would use a concoction of local sands and seaweed from the coastal town to treat rheumatism, bronchitis and other ailments. By the early 20th century, Igalo had established its own tiny medical centre that became one of the most revered in the Mediterranean.

Little has changed. In a picturesque cove, the Institut Igalo is the spearhead of Montenegro’s rekindled medical tourism industry. Every year, tens of thousands of individuals flock to the specialist medical centre for a wide range of treatments – from cardiac rehabilitation to intensive osteoporosis prevention programmes. A teaching affiliate of the Podgorica Medical School, the institute’s coveted physiotherapy programme is one of the most competitive in Southern Europe. When other European hospitals are unable to secure their own doctors learning places at Igalo, they send patients instead. Earlier this year, the University Hospital of Oslo landed a costly rheumatics deal that will see Institut Igalo treat over 2,000 Norwegians in the next three years. It’s with the aid of these international contracts that the institute is able to rake in a cool $14.7m per year. Private clinics in Podgorica are also increasing in popularity among health tourists. The city’s highly trained but relatively low-cost dentists are particularly soughtafter – helping to drive a holiday health industry that’s grown by nearly 20 percent in the past five years.

Investors are already rallying to accommodate that surge in growth. One third of all capital investment in Montenegro goes towards tourism and hospitality – and by 2021, that share will have increased to well over 50 percent, or $1.2bn. Investors like Barrick Gold’s CEO Peter Munk are leading the charge – he’s already shelled out $670m transforming one of the country’s dilapidated navy yards into a luxury port to rival places such as Monaco. Dubbed one of Europe’s most ambitious leisure projects, the lavish rebranding of Port Montenegro is attracting millions from high-end Russian and Middle Eastern markets – and it’s only a third finished.

Further south, Amanresorts International has signed an exclusive deal with the Montenegrin Government to lease and develop three new hotels on the island of Sveti Stefan. With such an influx of foreign investment, it’s hardly surprising that tourism now accounts for nearly a quarter of Montenegro’s entire GDP, or some $1.85bn per annum. As market demands shift and industries waver, the power of that contribution cannot be ignored. At last, it appears government officials have recognised the lucrative potential of their country’s breathtaking physical features – and although the influence of the country’s old industrial powers may wane, forecasts indicate there’s plenty of hope for Montenegro and its newly focused economy.