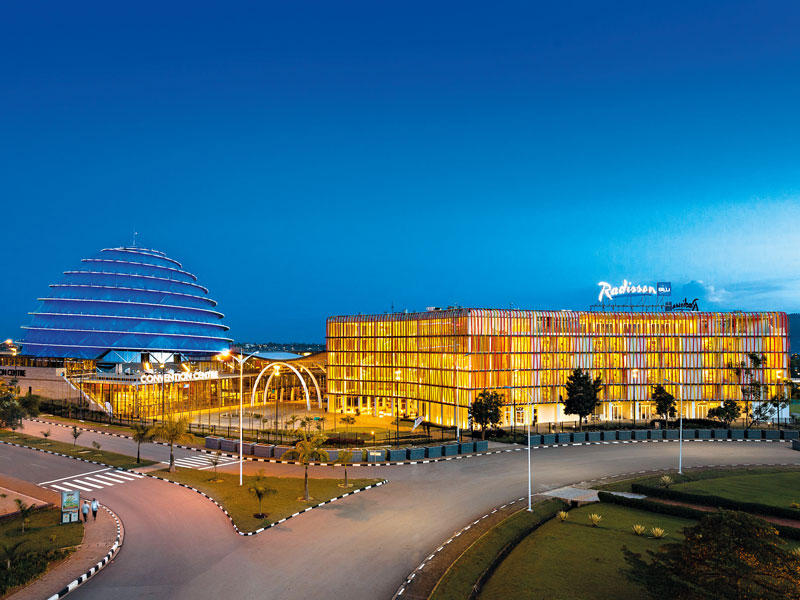 With state-of-the-art facilities, flexible meeting options and a convenient location, the Kigali Convention Centre is becoming one of the best MICE venues in East Africa

Located just five kilometres from Kigali International Airport and the bustling centre of Rwanda’s capital city, the Kigali Convention Centre has become the number one events venue in the country. Its location plays a large role in its popularity, with the centre being but a few minutes from numerous embassies, government offices and some of the country’s most prominent businesses.

The venue is also close to numerous local attractions, including Rwanda’s charming open-air markets and the world-famous Volcanoes National Park, to which tourists from across the globe travel to revel in the remarkable sight of gorillas in their natural habitat.

The sprawling centre can accommodate up to 5,000 guests, making it a hugely popular MICE hub for the entire East African region. But the Kigali Convention Centre boasts other distinctive qualities aside from its size: its striking exterior design and décor, for instance, have been heavily influenced by Rwandan traditions and culture, resulting in a welcoming space with plenty of aesthetic value.

Despite this nod to the past, the centre also boasts the type of cutting-edge technology, high-speed internet and audiovisual equipment that you would expect from any of the world’s best-rated convention halls.

MICE in Rwanda
Rwanda’s tourism industry has been growing at an impressive rate for the past eight years. In a bid to accelerate this growth, strategies focused on expanding the MICE sector in particular have been in play for several years. This drive received a jump-start in 2014, with the establishment of the Rwanda Convention Bureau.

Rwanda was one of the first East African nations to establish a convention bureau, but despite the MICE industry being an unfamiliar one, the market has responded positively and has taken off since. As such, Rwanda has become a high-ranking country for business tourism on the continent. Kigali, meanwhile, is regarded as one of the best cities in Africa for conventions, meetings and events.

In the time since the Rwanda Convention Bureau, which is a business unit of the Rwanda Development Board’s Tourism and Conservation Department, opened, MICE visitors travelling to the country have almost doubled. According to the World Bank, revenue has surged from $29.6m in 2014 to $47m in 2016. This growth is in large part due to the number of events that were hosted by the country in 2016.

Specifically, Rwanda hosted more than 40 international conferences, including several very high-profile events such as the African Union Summit and the Youth Connekt Africa Summit, both in July, the Global African Investment Summit in September and the Africa Hotel Investment Forum in October. By 2017, revenue from business tourism in Rwanda reached an estimated $64m – demonstrating impressive year-on-year growth for the burgeoning industry.

As indicated by the convention centre’s recent successes, the Rwanda Development Board has been keen to place greater focus on the MICE segment of Rwanda’s budding tourism market. Indeed, MICE activities have fast become the basis of the sector.

This is particularly noteworthy as the government is pushing forward with its plans to diversify the Rwandan economy. Its MICE industry therefore has a dual purpose, with international meetings and conferences being a fantastic marketing tool and a fine demonstration of the country’s economic development over the past decade.

Good housekeeping
Naturally, a blossoming reputation is often the result of attention to detail, convenience and consistency. This is certainly the case with the Kigali Convention Centre and its adjacent hotel, the world-renowned Radisson Blu. Representative of the centre’s state-of-the-art technological convenience is the Radisson Blu One Touch app.

The app, which can be used in any of the Radisson Blu group’s hotels across the globe, provides guests and event organisers with 24/7 access to hotel and local services, such as wake-up calls and transport. There is also a specialised section for MICE events, which includes an events calendar and bookings system for meetings. With all the relevant information in one place, it’s a must-have for attendees, while also being hugely beneficial for meeting organisers and exhibitors.

Dedicated consultants at the Kigali Convention Centre are also on hand to help MICE organisers customise the app to further enhance their experience. Event managers can, for example, instantly share information with attendees and delegates, including vital information such as the agenda, transportation details and speakers’ information. This is particularly useful if there have been any changes to plans as guests can be notified immediately.

The venue itself is even more impressive. The centre boasts over 32,000sq m of function space across 18 different sites, including an auditorium that holds around 2,600 guests. A broad range of dining facilities are also at hand; in addition to the exclusive Business Lounge and much-loved Italian restaurant Filini, the centre’s highly experienced chefs are renowned for cooking up international cuisine with an African twist. Meanwhile, complimentary parking for 650 cars ensures convenience for all guests – no matter how far they have travelled.

Further, the Radisson Blu Hotel and Convention Centre, Kigali is the only hotel in the country with a Safehotels Premium certification. The programme encompasses a broad range of criteria that must be met, including fire security, first aid training for staff and top-of-the-range security equipment. This adds a level of trust for guests, who feel confident that the venue meets high safety standards.

It’s showtime
Given the flexible space it offers and the state-of-the-art audiovisual equipment at hand, it is unsurprising that the Kigali Convention Centre has become the leading conference destination in Rwanda. Further exemplifying its status is the plethora of large-scale events that are being hosted there, bringing guests from one end of Africa to the next – and, indeed, from one side of the planet to the other. This continues to enhance the centre’s reputation and, in turn, its popularity.

With an increasing number of high-profile events being hosted at the Kigali Convention Centre, the venue has consolidated its place on the map of world-class conference destinations.