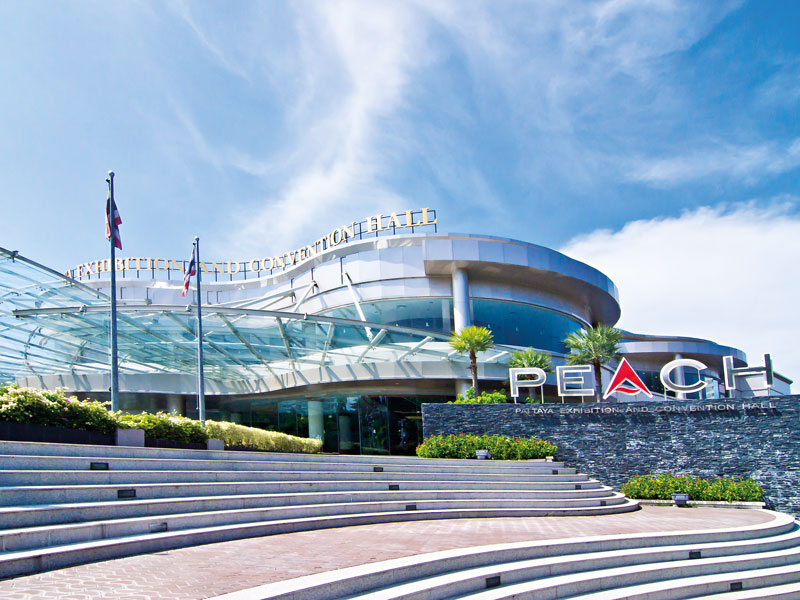 With four hotels and a world-class convention centre, the Royal Cliff resort is a premier destination for any business event in Thailand

Searching for a venue to host a major business function or convention can be a daunting task. With four world-class, award-winning hotels and the Pattaya Exhibition and Convention Hall (PEACH), the Royal Cliff Hotels Group resort in Thailand makes selecting a venue in South-East Asia a simple choice.

Overlooking the pristine blue waters of the Gulf of Thailand, Royal Cliff has welcomed dignitaries from all over the world and hosted industry events from across Asia.

PEACH’s proximity to Bangkok makes it ideal for business travellers: only an hour’s drive from Bangkok’s Suvarnabhumi Airport via a modern eight-lane highway, guests and convention-goers do not have to suffer through traffic to arrive at the resort. By comparison, driving to other popular Thai destinations such as Chiang Mai and Phuket would take around 10 and 16 hours, respectively.

The resort prides itself on its excellent standards, but that doesn’t mean it won’t be improved further

World-class venue
Adding to the resort’s convenience is the fact that its hotels are no more than a two-minute walk from the convention centre. Their location on the same private estate eliminates many of the logistical problems encountered in other venues and means multiple groups can stay under the same roof.

Over the years, PEACH has been the site of a number of prestigious events, some of them historic. Most notably, it hosted the ASEAN summit in 2009, and, with it, 11 heads of state. The convention centre also hosted a drafting of the Thai constitution, as well as Cambodian peace talks. Herbalife, Perfect China and Infinitus have all held company events at PEACH.

The site was designed with flexibility in mind. As such, the main halls have no pillars and the partitions are removable, meaning guests have control over the layout of their event. PEACH’s versatility has allowed it to host concerts, art exhibitions, weddings, gala dinners and product launches. It has even been converted into a football pitch.

Safety at the resort need not be a concern: more than 100 security officers patrol the premises, which is also monitored by CCTV. The management team has made significant investments in safety and security, and places a great deal of importance on making sure staff are well trained in crisis management and fire safety.

Environmentally conscious
Royal Cliff has always been dedicated to minimising its impact on the environment. It has received six Environmental Impact Assessment awards, and established an environmental management committee to oversee its green programmes.

Always improving
The resort prides itself on its excellent standards, but that doesn’t mean it won’t be improved further. The management has been meeting with architects and designers from around the country to upgrade the resort. One of the hotels will shortly have its exterior redecorated so returning guests can enjoy newly designed lobbies and breakfast areas.

The rooms at the hotel have been recently revamped to improve their balconies, furniture and light sensors. Significant investment has also been placed into the resort’s sports facilities, which include a spa, fitness centre, pool and seven tennis courts. Additionally, the resort’s partnerships with businesses across the city of Pattaya mean guests can enjoy VIP treatment when they go to partnered zoos, water parks and heritage sites.

Having hosted royalty, heads of state, sporting legends and entertainment icons, Royal Cliff’s world-class service is unparalleled in South-East Asia. Whatever the motivation, be it the scenery, quality of venues or convenience, Royal Cliff is the natural choice for business travellers visiting Thailand.