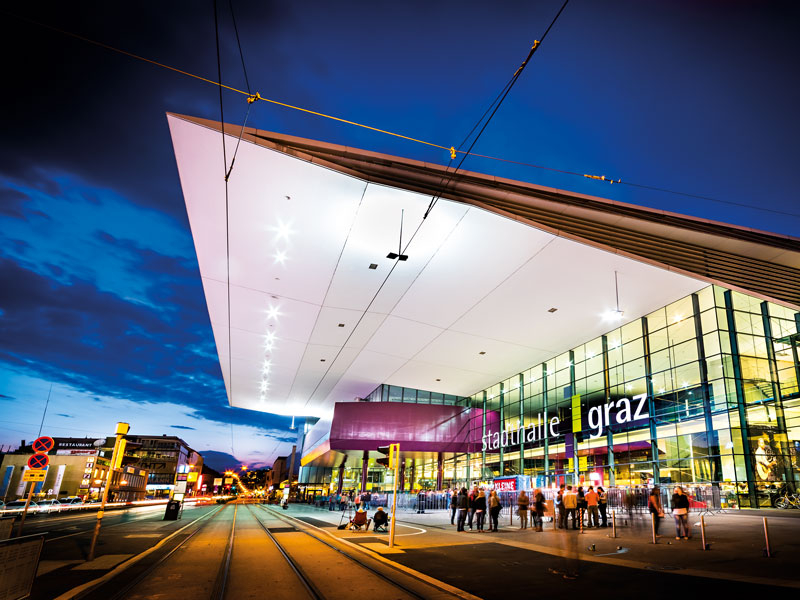 Messe Congress Graz offers a host of venues to suit every event, from football games to citywide festivals

With 44 multifunctional rooms for meetings, conferences, balls and concerts, as well as seven exhibition halls and the most modern multifunctional hall in Austria, the facilities offered by Messe Congress Graz are wide-ranging enough to suit any visitor.

Several venues – Congress Graz, Messecongress Graz, Stadthalle Graz, Messe Graz and a number of sports arenas – are part of the Messe Congress Graz brand. The events staged by the brand are as diverse as its venues: it is not uncommon for trade fairs to be held in parallel with football games, classical music concerts, international congresses and theatre shows.

Not only is Messe Congress Graz working to secure its own future, it is also developing with the future of the planet in mind

A network of venues
Congress Graz offers 19 meeting rooms with floor spaces ranging from 44sq m to 640sq m, all within an inner city location. Steeped in history and fitted with state-of-the-art equipment, the facility – which can accommodate up to 2,300 guests – is an ideal stage for any type of event.

One of Congress Graz’s sister sights, Messecongress Graz, provides an adaptable space where up to 3,000 guests can meet in a range of event formats. The 25 meeting rooms are equipped with microphones, modern lighting and sound technology, full HD monitors and large-scale presentation screens.

Stadthalle Graz, which is connected to Messecongress Graz, offers 6,500sq m of pillar-free event space for up to 14,520 visitors. Stars such as Bryan Adams, Linkin Park and Volbeat have already filled the hall with their music and fans. Since the hall’s equipment and infrastructure is mobile, it can be transformed into a concert arena, sports stadium, TV studio, trade fair hall, gala venue or ballroom with ease.

Stadthalle Graz is Austria’s second largest venue, and undoubtedly its most modern. The facility exhibits the creativity of its designer, architect Klaus Kada: the spectacular jutting roof above the hall’s entrance reaches out to the public space outside, while the back of the hall can be entirely opened, merging inside and out.

Messe Graz is a popular choice of venue when Messe Congress Graz stages its own fairs. Around 15 fairs are held on the site’s grounds every year, the highlight being Grazer Herbstmesse, the largest public–access fair in Southern Austria. The Messe Graz exhibition complex has seven halls and four outdoor spaces offering 40,000sq m of total expo space for up to 75,000 visitors.

In 2015, Nuke Festival was staged at the event complex. More than 24,000 visitors attended this open-air event, which, together with the event’s organisers, the Messe Congress Graz team made possible.

Looking to the future
Two major facility upgrades have been started in the last 12 months at Stadthalle Graz. The process to increase the maximum capacity to 14,520 has just been completed. Additionally, plans to fully modernise the venue’s exhibition stands system are set to be completed this year.

Messe Congress Graz has also recently invested €29m ($34m) in Merkur Arena and Merkur Ice Arena, two of the sports centres at Congress Graz. The investment will go towards the renovation and reconstruction of the two venues.

Not only is Messe Congress Graz working to secure its own future, it is also developing with the future of the planet in mind. The complex recently installed a 385kW photovoltaic roof to one of its venues, and the electricity generated from this will be used to provide homes in Graz with renewable power.

Furthermore, Messe Congress Graz provides members of staff with bicycles they can use to travel from site to site. Since 2016, the complex has been providing promotional materials made only of environmentally friendly materials: it doesn’t hand out plastic bags, its pens are made from rolled paper and the ink it uses is sustainable.

Messe Congress Graz’s venues all provide top-quality services for business occasions. Together, they form a complex that will meet the needs of any client looking to host an exemplary event.