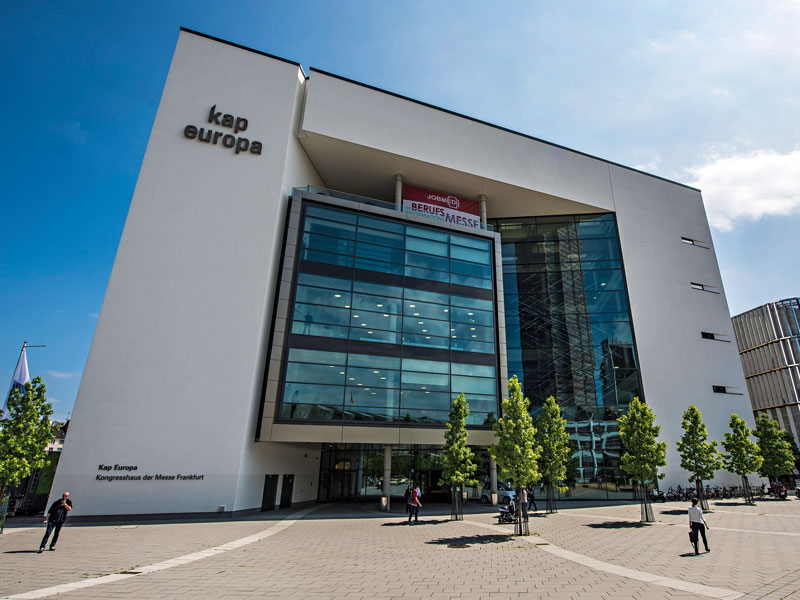 Located close to the centre of Frankfurt, one of Europe’s financial capitals, Kap Europa is a venue that places sustainability at the core of its offering

Frankfurt is Germany’s fifth-largest city, a place that mixes old and new to create something altogether unique. Visitors can wander around the reconstructed medieval old town or carry out high-level business meetings in the towering skyscrapers of the financial district.

The city has many museums and galleries to keep tourists entertained, and top-class restaurants are on hand to serve local delicacies and international fare. Culture fans will be excited to learn that the city was the early home of Germany’s most celebrated writer, Johann Wolfgang von Goethe.

Frankfurt is also home to Kap Europa, a convention centre that opened in 2014 and offers high-level services for international trade shows and smaller-scale meetings alike. It is rapidly gaining a reputation as one of Germany’s finest exhibition spaces.

The venue can be booked in its entirety or by floor, meaning organisers only have to pay for the space they need

More than just finance
Financial meetings and conferences are understandably popular at Kap Europa, which benefits from Frankfurt’s standing in the finance sector. As the home of the European Central Bank, the German Federal Bank and a host of innovative fintech start-ups, the city is often regarded as Europe’s financial centre.

However, Kap Europa does not restrict itself to one particular type of event or industry. It is true that conferences relating to banking and financial services are frequently held at the venue, but the facilities have also proved suitable for events relating to software, insurance, education and much more.

With space for 2,400 guests across its two halls and 12 conference rooms, the flexibility provided by Kap Europa is one of its main strengths. The venue can be booked in its entirety or by floor, meaning organisers only have to pay for the space they need – no more, no less.

The services at Kap Europa also help ensure that every event hosted there is as good as it can possibly be. A personal project manager is on hand to offer advice and help with project coordination. They’ll happily assist with branding, visitor management, catering, security and other issues that might emerge during the event.

The venue was the first in Germany to be listed in the Green Venue Report and the first to receive platinum certification by the German Sustainable Building Council.

In terms of its design and construction, sustainability is key at Kap Europa. All of the building materials were tested for their environmental compatibility and emission values.

The 1,000sq m roof is covered with greenery to reduce the venue’s carbon footprint, and energy-optimised window fronts were installed to reduce energy consumption and make the most of natural lighting. A concrete core also helps to cool the building at night, decreasing the burden placed on its air-conditioning system.

Furthermore, Kap Europa is careful to limit waste across all aspects of its operation. In terms of catering, the venue primarily uses fresh, organic produce from regional suppliers and focuses on using as little non-recyclable packaging as possible.

By partnering with energy firm Mainova, the conference centre ensures it only uses green electricity from renewable sources. The cleaning products it deploys must be biodegradable and adhere to all environmental protection standards.

Boasting both flexibility and sustainability, Kap Europa has managed to attract a number of fantastic industry events in the four years since it first opened its doors. Many more are already planned for the months to come.